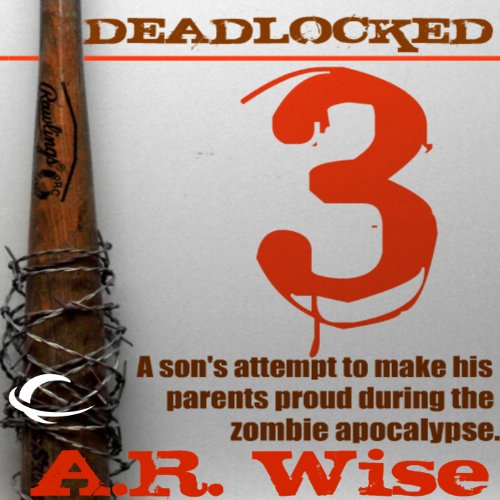 The Deadlocked series continues as Billy heads into the city in search of his mother. During his quest, he will meet a strident military figure that will alter his journey and two brothers that will become his closest allies. However, his trip will endanger the family he has only just met, and he might not be able to save them. Billy's journey into the city will reveal many of the secrets of this penultimate novella. No characters are safe from the terror that has engulfed the city, and as the motives of those in charge begin to be revealed, the fate of all mankind will be in question.

What listeners say about Deadlocked 3

SOME HEROS ARE BORN TO BE SO WHILE OTHERS MUST ENDURE HEARTACHE AND SACRIFICE TO REACH THEIR POTENTIAL. AS A MOTHER OF A SON I FOUND BILLY'S LOVE FOR HIS MOTHER HEARTFELT AND GENUINE. I SHED A TEAR DURING THE MAIN SCENE BETWEEN HIS MOTHER AND HIM....WELL DONE WISE....WELL DONE!

SOME (TINY AMOUNT) OF INFORMATION REGARDING THE OUTBREAK IS REVEALED BUT ONLY IN THE LAST 3 BOOKS AVAILABLE DO YOU START TO UNDERSTAND THE WHOLE CAUSE AND REASONING.......WHICH WILL ONLY PISS YOU OFF OR MAKE YOU THINK ABOUT THE ETHICAL DECISIONS MADE BEHIND THE OUTBREAK.

KEEP LISTENING...... THE SERIES ONLY GETS BETTER AND CRAZIER.

Now this is was much better

Where does Deadlocked 3 rank among all the audiobooks you’ve listened to so far?

Hero and his twin brother. I liked them the best because they added humor to this installment of the series.

Have you listened to any of Christian Rummel’s other performances before? How does this one compare?

I listened to the entire Remaining series and I enjoy him because you and distinguish the character when he reads.

Spoiler: When they had to take to hill to the dock and hero had his brother on his back and he and Billie made it a competition to see who killed the Mose zombies. Then hero and his brother ran straight into to the zombies. I cried he he said said tell him he's my Hero.

Starting to feel a little expensive now, but I figure this series is worth it. The narrator is crazy good, excellent job.

Now its Billy's turn to lead the storyline and like Laura, he is learning to be ruthless. The plot is getting really complex and confusing but that's the intention as we're trying to figure out the who's and the why's and the what's. On his way to find his mother, he has to kill people he doesn't want to kill, his enemy becomes his ally and another survivor enters the mix with his own opinions. This book just had so much packed into it. Top marks!

the men take the zombies on

A young man makes the journey into the city to find and rescue his mom. He has a lot of responsibility thrust upon him during this apocalypse – save his mother, save his friend and her daughters. He has to step up and do whatever it takes – including killing humans as well as zombies. Armed with a barb-wired wrapped baseball bat and his motorcycle, he drives off to his mothers. He encounters a horde of zombies held back by a fenced in area created by the military only to inadvertently release them.

He runs into Reagan, an older military man who is strictly by the book and two twin brothers who are an unlikely duo and friends. After several close calls and a couple of heart to hearts, Reagan encourages Billy to finish what he had started and he would protect him sending him help in the morning. The twin brothers join forces with Billy and attempt to return to the docks to save the mother and children from rogue cop like bad guys. On their journey they run into another horde but ingenuity and guts, the men take the zombies on.

There are some extremely sad moments that make even the strongest choke. They arrive at the docks and the military help arrive – one of the injured lives, the other does not.

While I have not read the others books in the series, after reading this one I will! The main character is very likable and draws the reader in to the story quickly. The bond between reader and characters is established quickly and continues.

This is a great zombie book – because of how it is written, there are lots of ways for this series to move – all of them very interesting!

The narrator, Christian Rummel, does an excellent job. He keeps the story flowing with a clear voice and with the correct amount of feelings in the right places.

The production version by Audio Studies was excellently done – no glitches.

This is an action packed zombie thriller. This segment is as angsty as volume 2. That's a good thing. This book follows Billy and introduces some new characters. He's on a search for his mother. Little more is learned about what caused the zombie apocalypse but breadcrumbs are dropped.

The excitement and action true to this series is non stop as Billy goes into the city leaving the family he recently met behind. I hate to give anything away but this is the best in the series yet.

I have been enjoying this zombie adventure story. There are so many twist and turns in this book that I haven't been able to guess the ending.