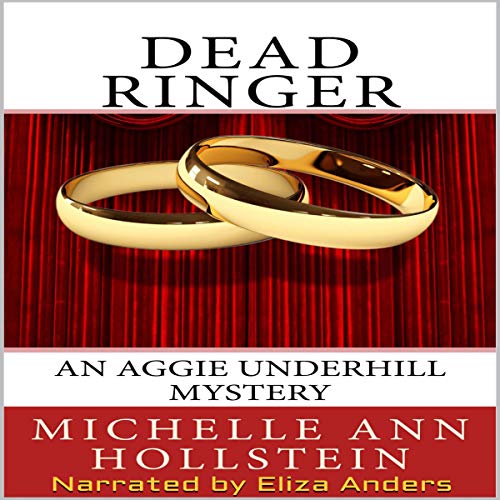 By: Michelle Ann Hollstein
Narrated by: Eliza Anders
Try for £0.00

Aggie and her friends have rented a beach house in Oceanside while anxiously awaiting the birth of her granddaughter. Little did she know that Roger's supposed near-death experience of practically choking to death on a golden ring baked into a gluten-free doughnut would land her in so much trouble.

Now, it's up to Betty, Aggie's best friend, to put the clues together and play detective in order to dig Aggie out of a dangerous situation.

Will the mystery of the golden ring be solved before Aggie's granddaughter is born?

Join Aggie, Betty, and Roger in this comical escapade to find out.

What listeners say about Dead Ringer

I enjoyed listening to Eliza Anders

Aggie is waiting for second grandchild to be born.
Roger, finds a wedding ring in a donut and he is has rude as normal.
A fun mystery

Aggie and her friends anxiously await the birth of Aggie's second grandchild. Roger heads and and as usual is looking for a deal. So he get donuts for breakfast. Only this time its not such a deal when he finds a wedding band in his donuts. The story moves at a nice pace and Roger is as rude as always. The introduction of Betty's blog is quite fun! Great job on the narration.

Much more than just doughnuts

Unbeknownst to her, Aggie Underhill had acquired a bit of a reputation as an amateur sleuth following the writing of her exp!loits on a blog kept by her close friend, Betty. She only discovered that she was famous when she and Betty, together with Robert, rented an holiday home to be present when Aggie'e daughter had her second baby. Local pleasures included the bakery with doughnuts to die for - almost literally, when Robert nearly chokes on a gold ring inside one of them. And being a nosey sort of psrson, Aggie finds herself in trouble again.

This lighthearted, rather ridiculous mystery. Is very character focused and great fun; it would surely make a great comedic thriller film in the style of the old Ealing comedies or the Margaret Rutherford Agatha Christie movies. Narrator Eliza Andes has a very pleasant voice and reads the text beautifully. She also individually voices each of the protagonists - and this is where, for this reader, the problem arises. Because Ms.Ander's rendering of the females is so over the top and silly, it was hard to get past the early chapters - there is a lot of conversational exchange. A pity because with a less satirical performance the whole book would have been not only more enjoyable but much funnier also. A real case of less is more.

This is the first of the Aggie Underhill stories that I have read, although I am familiar with other of M.A.Holstein's books and always found them well written and enjoyable. My thanks to the rights holder of Dead Ringer, who, at my request freely gifted me with a complimentary copy, via Audiobook Boom. I will be looking out for others in the series to brighten up those days when something undemanding and fun is needed. But, sadly, not one read by this narrator: better to read the printed version instead.

Aggie and her friends are so much fun to listen to! You never know what kind of trouble they will end up getting themselves into! Not to mention how they get out of it! definitely recommended by me!

I think the story is good but the narrator made these characters grate on me like fingernails on a chalkboard. I think I would rather read these books than listen to them.

This was a great cozy mystery! I really like the narrator and the story was great!

Don't bite off more than you can chew

Dead Ringer book is a fabulous fast paced read. I love how over dramatic Roger became it made me laugh out loud. I love these characters they are loveable and believable. The characters are just like best friends by now. The storyline is awesome, imaginative and fun. I can't wait to read more.
I received this audio book at my request and it did not disappoint me at all. I am voluntarily leaving an honest review because this series is phenomenal and a do not miss read.

I am such a fan of Aggie Underhill....or Maggie Overhill🤣...these are such fun to listen too. This had a surprising twist that I sure didn't see coming. I love that despite all their differences..this group of friends comes together when crisis strikes! I also can feel Aggies pain in regards to her cell phone..ugh. Truly I suggest giving this series a listen.

Aggie Underhill has become one of my favorite mysteries to listen to! The humor, twists & turns, adventure and imagery Michelle Ann Hollstein writes into these stories is absolutely wonderful! I got a few strange looks from my kids when I would laugh out loud! Like another reviewer warned...do NOT drink while listening to this book, you'll end up wearing it (or your laptop will)! The narration was very well done! I enjoyed Eliza Anders way of bringing this book to life. She gave each character their own voices and emotions. She really helped to pull the listener into the story and how she managed to not burst out laughing or at least have a laugh in her voice is beyond me!! If you are looking for an entertaining listen then you should check out this book or any of the Aggie Underhill books! You won't regret it!

Dead Ringer: An Aggie Underhill Mystery was a great read by Michelle Ann Hollstein. Aggie and her friends rent a beach house while waiting for the birth of Aggie's granddaughter. While eating donuts, Roger nearly chokes on a golden ring baked into the donut. Little did they know that near death experience would get them all in trouble. I enjoyed reading Betty, Aggie and Roger trying to put all the clues together and find the owner of the ring. I can't wait to read more by Michelle Ann Hollstein.

Aggie cracks me up! This series had me on the edge of my seat the whole time. I even got weird looks from people for laughing out loud at some parts. Great characters and a great mystery!