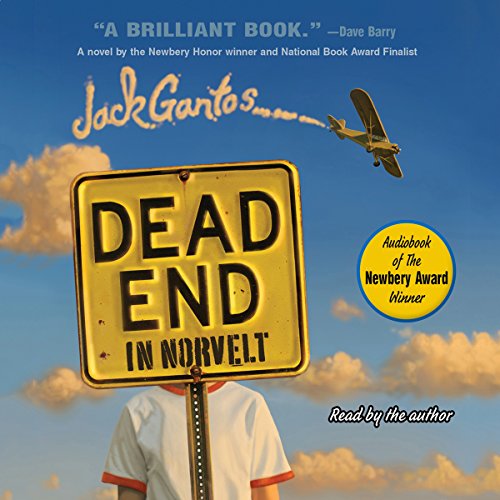 Winner of the John Newbery Metal for the best children's book of 2011.

Melding the entirely true and the wildly fictional, Dead End in Norvelt is a novel about an incredible two months for a kid named Jack Gantos, whose plans for vacation excitement are shot down when he is "grounded for life" by his feuding parents, and whose nose spews bad blood at every little shock he gets. But plenty of excitement (and shocks) are coming Jack's way once his mom loans him out to help a fiesty old neighbor with a most unusual chore - typewriting obituaries filled with stories about the people who founded his utopian town. As one obituary leads to another, Jack is launced on a strange adventure involving molten wax, Eleanor Roosevelt, twisted promises, a homemade airplane, Girl Scout cookies, a man on a trike, a dancing plague, voices from the past, Hells Angels... and possibly murder.

Endlessly surprising, this sly, sharp-edged narrative is the author at his very best, making readers laugh out loud at the most unexpected things in a dead-funny depiction of growing up in a slightly off-kilter place where the past is present, the present is confusing, and the future is completely up in the air.

Original, entertaining and funny. Norvelt is an amusing story that could be recommended to anyone at any age.

A Demented Little Nugget of a Book

I love love LOVE this demented little nugget of a book. No children's writer is more twisted or morbid than Jack Gantos, which is what makes him the BEST. In this Newbery-winning novel, twelve-year-old Jack gets grounded and spends the summer of 1962 helping a feisty old witch write obituaries for all the little old ladies in Norvelt, Pennsylvania, who may or may not be getting slowly poisoned to death. Meanwhile, Hells Angels move in down the road and start burning local houses to the ground, and the next door neighbors start up a funeral parlor. This is a great novel about what it's like to be young, bored, and grounded, and in the funniest scene OF ALL TIME since Barbara Park wrote Skinnybones, Jack describes his method for noiselessly scaring deer away during his dad's hunting trip. (Spoiler: it's farts.) Gantos' deadpan humor translates best when he reads it out loud; I can't recommend the audio highly enough!

Can't believe it won the Newberry...

Bought this book right after learning it was the Newberry winner, I usually love the books they select. The plot had so much potential and I wanted to like it. Actually had to force myself to finish it to see if the end was so great it made up for the beginning. Found it a jerky ride of manic tangents and multiple themes barely held together in a story so random and contrived that I couldn't force myself to suspend disbelief.

I was sick of nosebleeds, old ladies being murdered and frequent, irritating "faux" swearing (like cheeses crust) by multiple persons, which as read by reader sounded like normal swearing. The main character is a young teen who speaks, thinks and evaluates like an old man looking back rather than a teen experiencing the events. All the characters are quirky and felt manufactured. The setting in the 50's didn't feel real either, a bomb shelter being dug in the back yard does not an era make.

Someone obviously likes it, but many books in the past few years just earning "honors" and not the award are much better.

Where does Dead End in Norvelt rank among all the audiobooks you’ve listened to so far?

The chraacters are charming. Imaginie the protagonist beiing grounded for the whole summer except when he gos to help an elderly lady who writes obits. She is a fabulous writer, we shoul all have such a gifted writer. She iincludes significent history among her writings, historical facts you will enjoy remembering and surprised you'd forgotten. Norvlt is a real place and you ned to know what it means.

Jack and Miss Volker--together they make the story roll.

He has a gift for humor and plays on words. You won't put this book down or begin to think about how small towns begin to meet their demise.

No film for this book

Great story for YA and adults

I enjoyed the history and the humor in this book. I think young boys would especially enjoy it.

Mr. Gantos is really good at reading his own work.
I started to get sick hearing about nosebleeds and Eleanor Roosevelt about a third of the way through the book.
He has talent, but this got tedious.

What a funny, slightly dark, creative story. My 11yo son and I both loved it.

You are reading this

I loved this book so much... listened to it 3 times in 6 months! MUST LISTEN!!

Best book ive listed to so far, its exiting!

It's a nice long book, its very fun and after every chapter you want to read more. The chapter always end at a cliffhanger so you want to keep reading. The Nairriater is very good and it just so happens to be the author. The voice for it is verry compelling and has alot of emotion to the words. The narration allows you to understand what is happening by the way it is told. The story is great for boys and girls around the age of 10-12 Boys will most likely enjoy it more. For girls it has alot of war stuff but overall its pretty good for both boys and girls. I love how it has verry funny parts in the book. And also some parts that who interest most readers. the story overall is a great to listen to, i couldn't stop listening once I started. This is a great book and recommend it to everyone.

This was a delightful Newbery winner. A story full of history and all the quirky people of a small, dead end town... Norvelt. Loved it! Will be posting a full review on my blog as I work toward reading all of the Newbery Winners.
Www.colecampfireblog.com