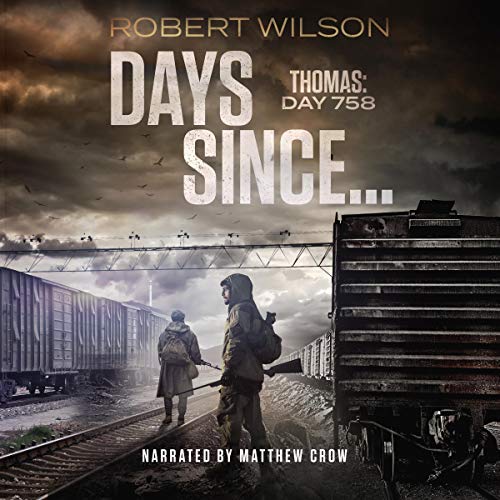 By: Robert Wilson
Narrated by: Matthew Crow
Try for £0.00

What if you put your fate in the wrong hands? What if taking it back was your worst option?

A virus devastated the world, and humanity lies in ruin.

Army veteran Thomas Ricard lost everything but his life - and his adopted son, Joseph.

Two years later, Thomas serves the Second Alliance. They bring stability to the region's survivors. They're far from perfect. But chaos was worse.

The opportunity comes when a band of human traffickers encroaches on the Second Alliance's territory. Thomas must lead the strike team to stop them, but the mission's loaded with a huge gamble.

If he succeeds, his family's future is secure. Failure means a swift transfer and losing his son.

Can Thomas win through and protect his family?

Will the Second Alliance even honor the agreement if he does?

This action-packed, post-apocalyptic thriller is the first book in Robert Wilson's Days Since....Almawt Virus series. Look for the second installment of the series: Days Since...Xavier: Day 853.

What listeners say about Days Since...: Thomas: Day 758

Ok this took me a little to get into , it was hard to catch on to the story line and the narrator didn’t help. I stuck with it and i got use to Matthew Crow and it started making sense. My advise is stick with it it will be worth it .

The concept was great, just didn’t really feel any

The concept was great, just didn’t really feel any connection to the characters. It felt odd that a person who wasn’t a ‘soldier’ was given a really important mission like this. People’s lives were at stake. An enemy who was causing issues. Given to a guy who hadn’t earned his stripes yet in their new military system.

This was a good post apocalyptic story, focused on rebuilding. Thomas' only concern is securing a future for himself and adopted son Joe, to acheive this he has to stop a group of trafficers. This was a promising start to a new series.

This book was an enjoyable apocalyptic listen. 5 hours of listening so not very long. A lot of detail was centered around 2 soldiers and the climactic battle.

I liked this story short and simple not complex a good guy and a bad guy.

the story was interesting and fast paced but I struggled with the narration. Although the narrator did the voices of the characters well his voice for the rest of the script was monotonous, even mechanical.

A good premise and well written. Possibly could be expanded with a little more detailed description of people, places and backstory but I really enjoyed the first in this series. The narration is mixed, when talking in character, intonation and voices are spot on but when falling back to in between narration, it stumbles.

Overall, well worth a listen.

Mr. Wilson did an excellent job of portraying a stark and bleak dystopian setting, where humanity is on the brink of extinction. The book has dark elements, dealing with sensitive issues such as trafficking. What I liked about Mr. Wilson’s writing is that he didn’t go for the shock factor and skipped the description of certain sensitive scenes.

The story itself is about Thomas, a nice guy, a veteran surviving in the aftermath of the Almawt Virus. Thomas's main goal is to provide a future for an orphaned seven years old boy, Joseph whom he adopted as his brother. To accomplish this, Thomas must become a Second Alliance soldier.

The Second Alliance's mission is to protect what remains of humanity. They must eliminate the threats against restoring the world. Thomas is selected to undertake a deadly mission and for him, the stakes are high and very personal. His only choice is to succeed.

The combat scenes were great and excellent in raising tension. A Few times, I was on the edge waiting to see what would happen next. Matthew Crow did a great job narrating this audiobook. His voice suited the main character. Overall, I enjoyed listing to Days Since...: Thomas: Day 758 and look forward to the next installment.

I don't WANT mankind to be wiped out but some post apocalyptic literature that doesn't have Zombies is good now and then.

Current events being as they are this book was particularly interesting.

I like how some of the characters were given backstories and some perhaps we will meet in the next book.

As ALWAYS Matthew Crow is a professional with his narrating and brings the book to life!

I was impressed with this first book in a series.In typical fashion,a virus struck down the humn race and awful humans are killing even more.Thomas is with the Second Alliance and is trying to make life better for himself and his 'little brother'.It is a hard life,but it could be worse he soon discovers. Matthew Crow was a good narrator.Looking forward to book 2.I was given this free review copy audiobook at my request and have voluntarily left this review.

A great start to a new series by an up and coming author! :-D Now, I cannot comment regarding proofreading as I listened via narration. Which was perfect, by the way. :-)

When I began reading, I didn't pay attention to the length, so before I knew it, I finished it in one night. 8-)

The storyline wasn't new for the genre, however, the promise was still interesting. I liked how he had to deal with PTSD from his time in Syria while on a mission to save a group of women and children. That's true to live! It doesn't just disappear once you're out of the region, mission or the military itself. So, kudos for getting that spot on.

I do hope to get to know Thomas better as the series continues. In addition, the world building could be developed some so that we get a better feel of where they are stationed in America, lol, when I'm reading I don’t like to stop and hit Google to get the landscape laid out in my mind's eye. Plus, maybe, I was tired but the scenes amongst the trains was a bit confusing.

Regardless, this was a nice read with a good ending. :-) I'm off to read book 2. I hope y'all enjoy this as much as I did!


My star ratings include these 5 elements:

1★ story line
1★ engaging characters
.75★ use of world building/descriptions
1★ the ending
1★ narration or editing


"I was given this free review copy/audiobook at *MY* request and have voluntarily left this review."

I really enjoyed this and I’m very much looking forward to the next book in the series. Listened to this in a day and a half. My workday flew by. Highly recommend!

I was given a free copy of this book. Thomas is given his first mission and can not fail or he will loose his brother. Great story. Loved the voice of the narrator. Can't wait to read/listen to the next book!

Hurry up I need book too!

Are usually do not like long books, but man do I wish this was longer. I can’t wait to read book 2 if you like society trying to survive this is a great one. There’s a good society and of course the bed it’s pretty freaking awesome!

This was a very interesting story. It held my attention. The performance was great. I can’t wait to find out what happens next.

I love a great ending!

I really got into this story about what happens after a major flu just about decimated the human population.
Thomas is eyeing a promotion to soldier in order to be better able to take care of his "brother " and is paired with Jommy to shut down a female slave camp run by the "Butcher ", who tries his nerves being a pain, but they form a bond.
I enjoyed the narrator and was rooting for the women's rescue while worrying about Tom and James.
I received a copy of this audiobook from StoryOrigin for my honest review.

Dystopian future with a touch of reality

The "Days Since" series is quickly becoming my favorite series to read, and now I can listen to the books anywhere I have my phone!

"Thomas" is a great foundation for the future of the series.  The author does a great job setting up the near future world of the Cincinnati area after the virus outbreak.  He uses very descriptive language in order to place the reader in the story.  I am from Cincinnati and I can say that the description of the places Thomas visits during his mission are spot on.  Wilson also does a great job developing the characters and the relationship between them.  I am looking forward to how Thomas develops as a character and how he interacts with the other main characters of books to follow.

The narrator did a pretty good job as well.  I appreciate his ability to change his voice in order to separate the characters during conversation, but the "woman" voice seems unnatural. He could also highlight some of the action words with a little more emphasis.  Overall Crow does a good job with his tone and speed and he speaks very clearly.

I will definitely buy the next "Days Since" installment when it comes available in an audio version.