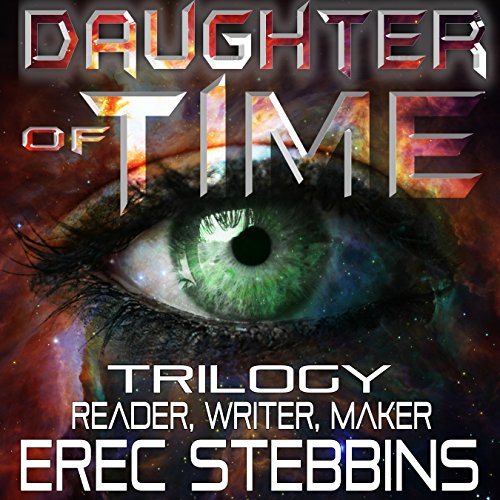 Reader, Writer, and Maker: All three novels of the Daughter of Time series in one book.

From the future, a final plea. Out of the past, a last hope.

Ambra Dawn, a young girl born to die in freakish disregard. A doomed world, enslaved to forces unseen. A final hope beyond imagining. Become a Reader, because in the end, the most unbelievable step in the adventure - will be your own.

From hatred, Love. From many, One.

A love story and sci-fi epic about the beautiful and terrible destiny of profoundly star-crossed lovers with a galaxy's fate in their hands.

Until all is lost, nothing is found.

Conclude the epic story of Ambra Dawn in the final installment of the trilogy. A story in which the one that was lost will be found, where a thief will guide through chaos and time, and where all that was held dear will perish. And in that final and utter destruction, there will be a Creation.

"Exploratory fiction at its most powerful and intelligent, Maker will challenge and reward all those who have ever wanted to believe in almost anything." ( Foreword Reviews)
"Literary fiction that transcends its genre." ( Portland Book Review)
"Unique and altogether profound, reminiscent of Bradbury, haunting, thought-provoking and surprisingly philosophical." ( San Francisco Book Reviews)

I loved the way this trilogy started and really hoped to keep the momentum going. but it seemed to peak at book 2. book 3 was great because of Cloan and her spunk but fell flat at the end. always entertaining but left me hoping for more.

lost out, then - [Silent Hill]

author lost focus, rescinded story with metaphors. did not end story, instead gave the review of a student in chemistry or earth science that had fell asleep during class in metaphysics, entertaining relativity. A C+ for class participation. Reader, writer, wrong.

A Great First Book In A Terribly Average Trilogy

No; I would've liked to say it was but... no. It was not well-spent time. While Reader (the first book in the trilogy) was quite enjoyable, the other two were boring, confusing, and incredibly repetitive.

I would've stuck to Ambra Dawn's POV, rewrite that atrocious romantic plot device that was Writer, and made it into a story of a semi-omnipotent girl on the path to self destruction. If you've only listened to Reader, you might think this is where the story will lead you but... I'm afraid I must shatter your dreams.

Her performance in Reader and Maker was very good; she conveys Ambra's emotional state so well I could not help but be completely enthralled by her painful journey. I felt it. Unfortunately, Writer is told from a male character's perspective, and she had to deepen her tone; as a result, her narration suffered.

I would gladly watch Reader; the other two I would ignore.

I wanted to like this trilogy, I truly did, but it seems most of the author's creative efforts were invested in Reader, and from there he didn't quite reach the story he wanted to tell. Either that or his aim was to alienate all of us who liked Reader.

Intelligent, and emotional. Daughter of time surpassed all expectations. The narration is one of the best I've ever heard.