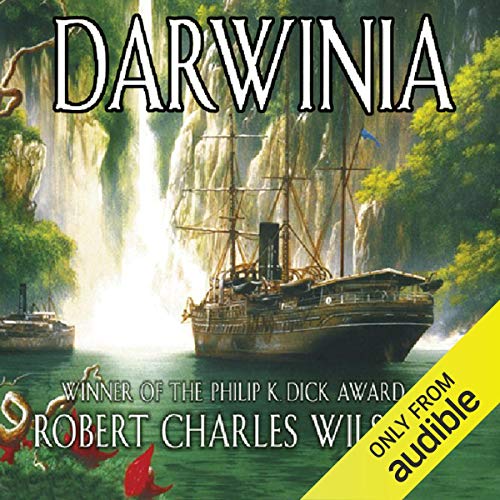 By: Robert Charles Wilson
Narrated by: Kevin Pariseau
Try for £0.00

In 1912, history was changed by the Miracle, when the old world of Europe was replaced by Darwinia, a strange land of nightmarish jungle and antediluvian monsters. To some, the Miracle was an act of divine retribution; to others, it is an opportunity to carve out a new empire.

Leaving an America now ruled by religious fundamentalists, young Guilford Law travels to Darwinia on a mission of discovery that will take him further than he can possibly imagine...to a shattering revelation about mankind's destiny in the universe.

"Wilson's two-tiered story structure reminds one of Michael Moorcock's work, but it is much more coherent and accessible. In the blurring of character identities, he is comparable to Philip K. Dick or to A.E. Van Vogt. He owes something to Colin Wilson and Lovecraft as well, in the discovery through dreams and archeological wonders of a hidden reality. That he is able to weld the two realities so fluently is remarkable indeed." (Publishers Weekly)

What listeners say about Darwinia

A bit of a let down

I got this audio book after listening to Charles Wilson's other titles on this site. I really liked The Chronoliths and Blind Lake, but this was a bit of a disappointment in comparison. It seems to take a while for the story to get going and even then it is disjointed and doesn't flow. I didn't connect with any of the characters and found I didn't care about their fates. I would recommend both Blind Lake and The Chronoliths, but this one I wouldn't bother with.

Very complex plot, which in itself is not bad, but in this case poorly executed. Narration was very good, unfortunately the story was not. The lead character is in complete denial throughout 85-90% of the book as to the reality of his situation to the point being very aggravating. The ending is rather ho-hum and is not satisfying; when I read fiction I prefer the “good guys’ to win decisively.

Some interesting, but not overly memorable characters in a plot that fails to click or engage. I really enjoyed Spin by Wilson, and the sequel Axis was decent, but this was not a very enjoyable listen (narration was fine). One of the few audio books I did not enjoy.

Robert Charles Wilson's Darwinia is an intriguing tale that begins as an alternate history tale and morphs into a pseudo-virtual reality story. The story begins in 1920, 8 years after all of Europe has been replaced by an alternate, uninhabited environment that has evolved apart from the rest of the planet. An expedition is staging to survey this new land, Darwinia. The young photographer in the group barely makes it out alive and experiences dreams where an alternate version of himself keeps appearing. At the same time, he does not appear to age. Gradually, over decades, he comes to recognize other like himself and learns that his world is actually a simulation, but that parasitic elements are trying to take it over.

Wilson offers the dichotomy between reality and simulation and asks whether it makes a difference. The new land, Darwinia offers some interesting plant and animal evolution. Ultimately digital complexity as with the rest of reality comes with malware that is always a pain to root out.

The narration is well done with a decent range of characters of both genders. Pacing is well aligned with the action and plot.

Not much about Darwinia.

I thought it would be more about the discovery of that new land Darwinia, but it turned out to be a boring saga about something rather other.