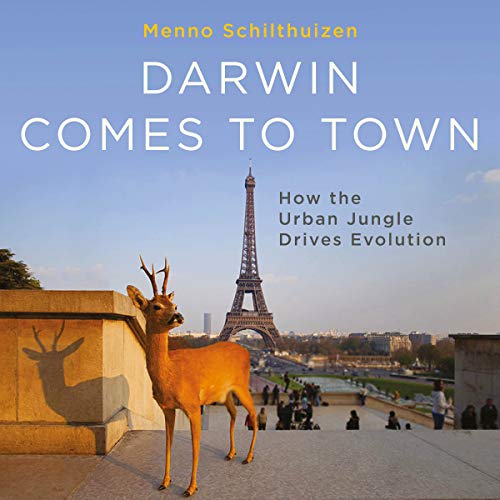 By: Professor Menno Schilthuizen
Narrated by: Chris Nayak
Try for £0.00

See your city through fresh eyes.

We are marching towards a future in which three-quarters of humans live in cities, and a large portion of the planet's landmass is urbanised. With much of the rest covered by human-shaped farms, pasture, and plantations, where can nature still go? To the cities - is Menno Schilthuizen's answer in this remarkable audiobook. And with more and more wildlife carving out new niches among humans, evolution takes a surprising turn.

Urban animals evolve to become more cheeky and resourceful, city pigeons develop detox-plumage, and weeds growing from cracks in the pavement get a new type of seeds. City blackbirds are even on their way of becoming an entirely new species, which we could name Turdus urbanicus.

Thanks to evolutionary adaptation taking place at unprecedented speeds, plants and animals are coming up with new ways of living in the seemingly hostile environments of asphalt and steel that we humans have created. We are on the verge of a new chapter in the history of life, Schilthuizen says - a chapter in which much old biodiversity is, sadly, disappearing, but also one in which a new and exciting set of life forms is being born.

Menno Schilthuizen shows us that evolution in cities can happen far more rapidly and strangely than Darwin had dared dream.

What listeners say about Darwin Comes to Town

You Never Know What's In Your Backyard

Great story of how nature has adapted to us and the way we have changed their habitats.

'Darwin Comes to Town' stands out as one of the most enthralling, enriching and enjoyable environmental books that I have read to date. This is high praise because, as an ecologist working for IUCN, environmental literature tends to dominate my reading list.

Schilthuizen delivers a spellbinding account of urban ecosystems, packed full of fascinating examples of the ways in which wildlife populations are undergoing rapid evolution to adapt to the built environment. Some of Schilthuizen's ideas and arguments (e.g. pertaining to alien species or connectivity) will undoubtedly ruffle the feathers of purist conservationists, but it is precisely that--the chafing against doctrines and dispelling of preconceptions--which makes this book so entertaining.

I initially read the hard copy and later listened to the Audible version. Nayak speaks clearly and smoothly, at an easy tempo.

For anyone interested in the relationship between cities and nature, it is a must read/listen. It might even convince you that cities are very much part of nature!