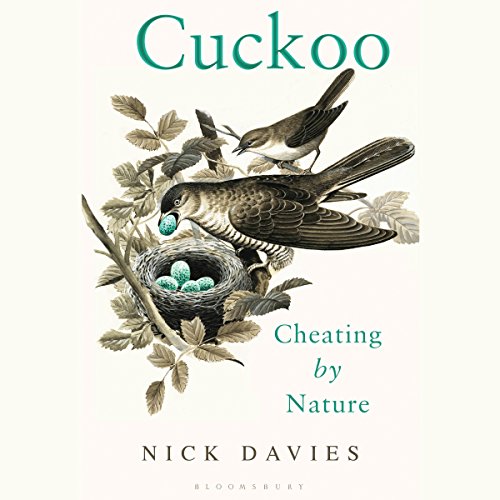 By: Nick Davies
Narrated by: David Thorpe
Try for £0.00

A gifted biologist's careful and beguiling study of why cuckoos have gotten away with tricking other birds into hatching and raising their young for thousands of years.

The familiar call of the common cuckoo, "cuck-oo", has been a harbinger of spring ever since our ancestors walked out of Africa many thousands of years ago. However, for naturalist and scientist Nick Davies, the call is an invitation to solve an enduring puzzle: How does the cuckoo get away with laying its eggs in the nests of other birds and tricking them into raising young cuckoos rather than their own offspring?

Early observers who noticed a little warbler feeding a monstrously large cuckoo chick concluded the cuckoo's lack of parental care was the result of faulty design by the Creator and that the hosts chose to help the poor cuckoo. These quaint views of bad design and benevolence were banished after Charles Darwin proposed that the cuckoo tricks the hosts in an evolutionary battle where hosts evolve better defenses against cuckoos and cuckoos, in turn, evolve better trickery to outwit the hosts.

For the last three decades, Davies has employed observation and field experiments to unravel the details of this evolutionary arms race between cuckoos and their hosts. Like detectives, Davies and his colleagues studied adult cuckoo behavior, cuckoo egg markings, and cuckoo-chick begging calls to discover exactly how cuckoos trick their hosts.

For birding and evolution aficionados, The Cuckoo is a lyrical and scientifically satisfying exploration of one of nature's most astonishing and beautiful adaptations.

"Narrator David Thorpe delivers this nature detective story with an appropriate sense of wonder, amusement, and approachable professorial authority.... Thorpe channels Davies's obvious enjoyment in his chosen profession and in the Wicken Fen, where he explores. Both appear to be having a whale of a time, and the enthusiasm is infectious--science this accessible is a pleasure." (AudioFile)

What listeners say about Cuckoo

This book lovingly explains the cuckoo's strange lifestyle. It is a fascinating story and it turns out not to be counter-intuitive at all, which to me is profound and amazing. Nick Davies gives detail of the methods, historical and contemporary, by which many of the puzzles presented by this remarkable bird have been solved and I now feel like I know everything about Cuckoos there is to know. As he always does, David Thorpe reads brilliantly.

A great book, which outlines the fascinating "arms race" between cuckoo species and their host's.
It is also a poignant reminder of what we have lost, over a very short space of time!

Cuckoo is a fantastic listen, Nick Davis is a master in his field, I've met him a couple of times, and he's a book of knowledge and a very nice guy, would highly recommend this book

If you could sum up Cuckoo in three words, what would they be?

This is a truly fabulous book that reveals the intricate co-evolution of the parasitic cuckoo and their hosts. Nick Davies has spent 30 years sitting patiently and watching the behavior of both cuckoos and reed warblers on Wicken Fen, a marsh nature reserve north of Cambridge, and then undertaken beautifully designed experiments to reveal the complex and fascinating biology of these and other species. The best defense by the host is to recognize when a cuckoo may try and lay her egg in their nest, then to recognize and reject the egg. Nick has made hundreds of artificial eggs to mimic the eggs of different bird species with different patterns on them that he then slips into the nests to observe when the host rejects and what the cuckoo can get away with. You start to realize the level of biology that is involved and appreciate that most birds eggs with their bright colors and complex squiggles and designed to stop parasitism rather than for camouflage. He asks perceptive questions and answers them with these neat field experiments (no birds were harmed) that reveal so much about the behavior of birds that everyone with a passing interest in birds or natural history will find this book a delight. This is without doubt one of the most enjoyable natural history books I have ever read - and I have several rooms full of natural history books.