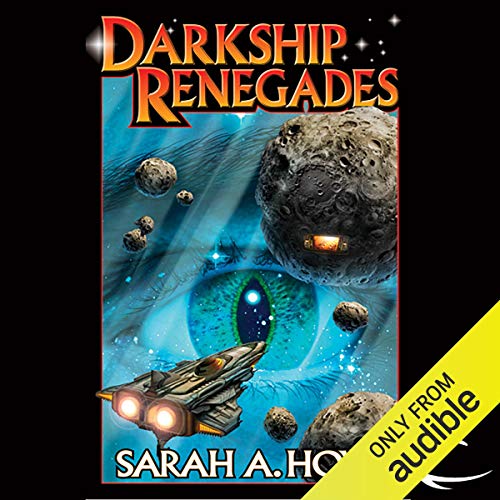 By: Sarah A. Hoyt
Narrated by: Kymberly Dakin

Entry number two in Sarah A. Hoyt’s rollicking and popular Darkship series, sequel to Darkship Thieves, and winner of the Prometheus Award.

After rescuing her star pilot husband and discovering the dark secret of her own past on Earth, Athena Hera Sinistra returns to space habitat Eden to start life anew. Not happening. Thena and Kit are placed under arrest for the crime of coming back alive. The only escape from a death sentence: return to Earth and bring back the lost method for creating the Powertrees, the energy source of both Eden and Earth whose technological origins have been lost to war. But that mission is secondary to a greater imperative. Above all else, Thena must not get caught. If she does, then suicide is to be the only option.

With the odds heavily stacked against not only success, but survival, Thena comes to understand what her cynical accusers do not: it is not merely one woman’s life on the line anymore. For it’s on Earth where the adventure truly begins. Thena realizes that what is truly at stake is the fate of Eden and Earth alike, the continuance of the darkship fleet - and freedom for all in the Solar system - and beyond.

What listeners say about Darkship Renegades

The author is an excellent storyteller. Okay, so it’s more of a hybrid, romantic science fiction, but with enough sophistication,action,and political insight to keep a male sci fi geek happy. It’s projected far into the future and the somewhat distorted history ,as remembered and documented, is interesting and entertaining. Ultimately, I care about her characters, they’re not perfect, they’re good people and fight for what they believe in. I plan on sticking with the series.