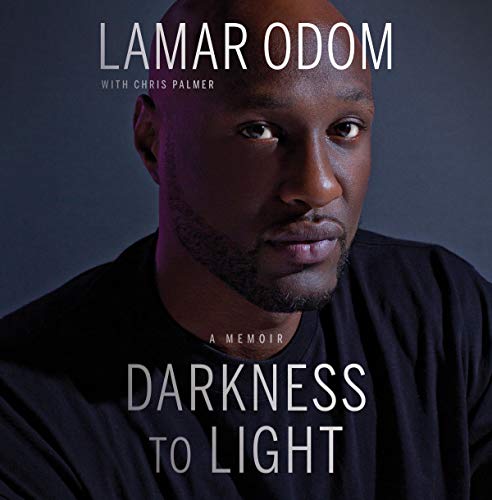 The world knows Lamar Odom as a two-time NBA world champion who rocketed to uncharted heights of fame thanks to being a member of both the storied Los Angeles Lakers and the ubiquitous Kardashian empire.

But who is Lamar, really?

Fans have long praised his accessibility and genuine everyman quality - he is a blinding talent who has suffered a series of heartaches, setback, and loss. But until now, his most candid moments have remained behind closed doors...sometimes face-down on the floor.

In Darkness to Light, Lamar gives listeners an intimate look into his life like never before. His exclusive and revealing memoir recounts the highs and lows of fame and his struggle with his demons along the way to self-discovery and redemption. From the pain of his unraveled marriage to Khloé Kardashian to the harmful vices he used to cope - and the near-death experience that made him rethink everything about his life - this is Lamar as you have never before seen him.

Lamar brings basketball fans directly into the action of a game during the Lakers' championship years. He shares his personal account of the lifelong passion that started as one shining light in a childhood marked by loss and led to his international fame as one of the most extraordinary athletes of all time. In this profoundly honest book, Lamar invites you to walk with him through the good times and bad, while looking ahead to a brighter future.

What listeners say about Darkness to Light

Beautiful read. Lamar bears his soul in this memoir. I laughed and cried. Cried even more. Chris narrates Lamar's life like he lived it. It's an amazing book

Loved the last few paragraphs really sincere and just a lovely man ,who like most of us ,took a wrong turn in life......i
I hope he manages to stay clean and have a great life!.......

It's a lot to take in. The heaviness was real.

Unfortunately L.O never had anyone to console him after his mom's passing. As a result I hear a man who refused to take responsibility for himself, who made bad decision after bad decision, and who allowed his emotions to overrule his logic. The 'not so favorable' events which had taken place in LO's life is truly of his own doing. An emotional dependent who didn't know how to love himself. If only his mother's last words were "Be nice to YOURSELF", then maybe that would've given him the courage to respect himself more. After his mom's passing, he wasn't taught to understand the meaning of life – nobody shared this to his soul, and he chose not to seek it.

Listening to this memoir did make me feel emotionally depressed at times; I could feel his emptiness – lights were on; but nobody was home! LO had checked out.

I pray that he now appriciates the lessons in his life, and is thankful for this earthly experience.

Love saved his life. Now its up to him, as it always was, to save himself. ❤️

different. interesting. sad to hear what he had to go through. obviously impacted all his relationships - family and otherwise
alotnkf drugs from a early age or time in his career

Brilliant! Keeps you gripped, listened to it over two days, I couldn’t put it down.

bought it for for Kardashian dirt . got disappointed. puts me to sleep in 10 mins so I guess its alright

Horrible choice of the narrator

Book was extremely long and drawn out. The narrator was just flat out boring! I had to struggle to listen to the entire book.

The book itself was very insightful. I liked how descriptive he was in telling various memories of his life. The only negative is the narrator. He was a bit monotone. I always like the the author to read it themselves but at least someone who reads with expression. I was able to overlook the voice and enjoy the book nonetheless.

I wasn't blown away.

It was just ok. No real new revelations outside of what was already known and what the media had disclosed. To be honest... He just elaborated on what was public knowledge. Lamar left a lot out.

Geez what a terrible book!

I always thought Lamar Odom was a nice guy who fell on hard times based on the tiny bit I knew about him from tv / the media. This book pulled back the curtain and I was less than impressed by what I learned about him. He was terribly unlikeable, and is a product of his repeated horrible and selfish decisions. That coupled with an extremely boring narrator makes for a terrible book. I want my wasted hours back. Eek!

For me it was just so disappointing to learn about his constantly repeated mistakes. How many times do you have to make the same mistake over and over again before you learn? Apparently a lot. The book was filled with excuses as to why his problems were because of someone or something else. The narration was inconsistent in speed, volume, and tonality throughout.

I am half way in and I'm struggling to finish the book . I am pushing my self through hoping the book will get better . As of right now not my kind of book and not what I thought it would be about .

Appeared honest and heartfelt.
Tearjerker for sure!
Thank you for sharing your most intimate moments with the world.
May GOD continue to bless you!

The narrator was boring. Need less details from childhood and more from when he was in the hospital to present. Seems like it was missing something.

WOW what a book

Lamar's story is not only heartbreaking but also inspiring. he has overcome a lot in his years here on earth. I'm glad he found a wonderful woman to have his kids by, that stood strong beside him regardless of his shortcomings. I'm rooting for you Lamar.