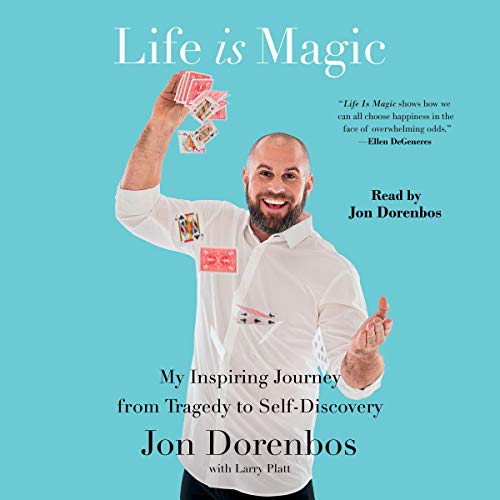 “Jon Dorenbos is a magical person. Life Is Magic shows how we can all choose happiness in the face of overwhelming odds.” (Ellen DeGeneres)

An extraordinary and empowering true story of resilience, forgiveness, and living a life of purpose in the face of unfathomable obstacles.

You may know him as an NFL All-Pro or as a world-class magician who made the finals of America’s Got Talent, but Jon Dorenbos says that what he does is not who he is. He is someone who coached himself, at the most tender of ages, to turn tragedy to triumph.

One morning in August 1992, when Jon was 12 years old and living a seemingly idyllic childhood in suburban Seattle, he woke up for baseball camp. His dad waved good-bye. Later that day, Jon heard the news: His father had murdered his mother in the family’s three-car garage. In an instant, his life had shattered. He’d essentially been orphaned.

Thrust into foster care while his father stood trial for murder, Jon struggled. Left to himself, he discovered an unlikely escape performing magic tricks. If you found a way to alter your reality, after your dad - your hero - killed your mom, wouldn’t you cling to it, too? Then came football, which provided a release for all of his pent-up anger. Together, magic and football saved him, leading to 14 NFL seasons on the gridiron and raucous sleight-of-hand performances to packed houses across the globe.

In 2017, he was diagnosed with a life-threatening heart condition leaving him with a choice. To either break down or - as he’d by now long taught himself - bounce back.

“Life Is Magic shows how we can all choose happiness in the face of overwhelming odds” (Ellen DeGeneres) and provides a road map for overcoming even the darkest of times. Jon’s story is poignant and powerful, told by a charismatic and optimistic man who has overcome life-or-death challenges with grace, persistence, a childlike sense of wonder...and jaw-dropping card tricks.

What listeners say about Life Is Magic

It felt like I was there with Jon on every step of his journey. I’ve never felt so emotional while listening to a book....

loved this book, I knew a little about the author and was very curious about this story. I was very surprised as to how much it hit home and how much I was effected by this guys wonderfully candid account of his life.

Amazing story that dives into the deepest, most vulnerable areas of the human psyche that Jon was forced to travel through. The areas that are often filled with anger and pain, and shows you how one could choose to stay in that spot and become a victim, or one could choose, like Jon, to be better. To face the hard feelings, heal, and force yourself to choose happiness through forgiveness, positivity, and giving of self. Very powerful and inspiring.

wonderful book. great message. I laughed - I cried - I cheered. must read. thank you Jon

This profoundly moving real life story will not leave a dry eye in the house. It's amazing that Jon Dorenbos had journals and a vivid memory of the events surrounding his mother's death. He could have repressed or denied the details, but he brings this difficult passage alive in his transparent account of his 13th year. As much as his life involves tragedy, he was also blessed to have the therapist he did at the time, family support, and many redemptive experience over the years. I love this -- a story of trauma, and of magic and miracles.

Very moving story, as deep as a person can get into vulnerability. One of the best books I’ve ever read. Highly recommended! For the sports fan or anyone who wants to connect with people, this guy just gets it..

Jon is an amazing football player, magician and even better human being….this is a must read!

Never cried so many times listening to a book!

This was one of the best books I've read in a LONG time. I binged it. I've never cried so many times reading a book. Aside from the story being unbelievable, Jon's story TELLING is *remarkable.* His soul, generosity and wisdom pour out of every single page. I've recommended it, gifted it, and re-read it. Absolutely incredible. As someone who is a life coach and studies the content that Jon teaches in this book - I'm blown away by the simplicity, relatability and entertaining way that he delivers it. Totally inspiring and uplifting.

Everyone should listen to this!

I did not know Jon Dorenbos before I chose this book but I am glad to know him now. Not just for football fans. This book, his story will entertain and inspire you. very touching look at someone else's life and how people cope. Highly recommend.

A stunning story of triumph over tragedy. Life is what you make it. Dorenbos is the man.