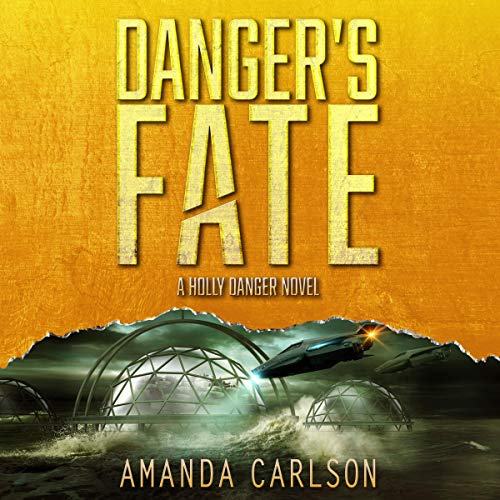 By: Amanda Carlson
Narrated by: Emma Wilder
Try for £0.00

The floating city exists. Upon receiving the urgent missive, confirming the existence of the Flotilla, there’s nothing left for Holly to do but rush to their aid. Hundreds, if not thousands, of lives are at stake. But the government, now run by her crew, are holding back their efforts. Betraying them could mean the start of a bitter feud, just when the dark city has a chance to regain its lost resources.

Alaria Bancroft is in the fight of her life - against her father and his trusted followers. After cutting the hydro-farms loose, they’re in jeopardy of being lost at sea. To complicate matters, the biospheres are broken beyond repair, and food stores are rapidly dwindling. If help doesn’t arrive soon, they all die.

Ari’s only option is to sneak back into the floating city in one last attempt to save as many as she can. When Holly arrives, the two have to work together, but it might be too late.

What listeners say about Danger's Fate

I adored this book, I've been waiting a long time and it was worth it! I loved Ari, the new female character that shared narration with Holly in this book. We find out that the floating city is real and things are starting to look up for both groups as through Holly & Ari they are united! I can't wait to see how things change for everyone. There was a hint dropped at the end connected to Holly and I can't wait to see where that leads as well!

An amazing conclusion to an exciting series

An amazing conclusion to the Holly Danger saga. The Flotilla, already mentioned in the first book of the series, is a reality, and victim of a crazy man, they are in need of help. Holly and her team will try to assist, but they will need to do things they have never imagined before.

The Flotilla was something that caught my attention when I first started reading this series. I knew there was going to be a good backstory. Many of the elements in the series are tied up here in a satisfying conclusion. The world created by Amanda Carlson was a very exciting one, and I had a great time exploring it along Holly, Daze, and the rest of the characters. I have read this book with a mix of satisfaction and sadness. It was an exciting journey, and the characters did grow on me. Secondary characters have more importance in this book than in previous ones, and this helped in providing a rich story.

Emma Wilder does a stellar job again narrating this book. It is her usual top-notch narration, which makes listening to this book a great pleasure. Wilder gave the characters have distinctive voices and transmitted their emotions so that they feel like real people.

As sad as it is to say good-bye to a great series, we can witness the beginning of something else at the end of the book. I’m looking forward to what Carlson has in store for us, I am sure it will be amazing.

I received a free copy of the audiobook version of this book for an honest review.

I loved it! I love this series! Like all the books in this series, they’re fast-paced, enjoyable, and hard to put down. I feel like I waited a long time for this book to come out, so I wasn’t sure how I’d feel about picking up on this series after all the time had passed, but it made no difference. The author created characters who are all unique and it was easy to pick right back up on what was going on.

As also, I'm a huge fan of the narrator, Emma Wilder; she does an awesome job narrating. She's one of the few female narrator's that I feel can do a great male-sounding voice.

I fall more in love with Holly Danger the more her story is revealed. She is a strong heroine, but not that fake strong where she puts men down. She embraces all of her companions strength and weaknesses and that is 1 of the things I love about her. The author does an amazing job bringing the people and the world alive. and the narrator does an amazing job bringing the characters to life.

I have received this audio book free in exchange for an honest review.

I received this audiobook for free for an honest review. Again, Amanda Carlson does an excellent job with this thrilling series. I enjoy this series immensely. Holly's exploits and the parts the other characters play on the team makes this story exciting. The story keeps you on the edge and your attention until the end. Couldn't stop listening. Look forward to each story in this series. The narrator does a great job with the characters.