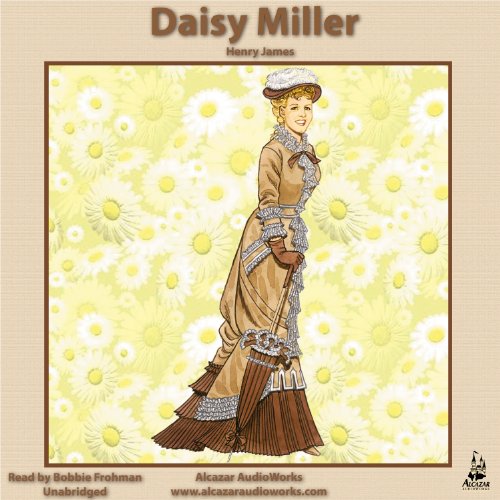 By: Henry James
Narrated by: Bobbie Frohman
Try for £0.00

Henry James' signature theme, the American abroad, centers on a beautiful but flawed daughter of a wealthy Schenectady industrialist. Daisy Miller travels through Europe with her doting, vapid mother and rambunctious young brother. Daisy falls for the sophisticated Mr. Winterbourne, another expatriate, but their romance is threatened by Daisy's behavior. The mores and traditional social customs were something Daisy managed to ignore and caused more than a few eyebrows to be raised throwing her reputation into question. The story has a tragic and unexpected ending.

Henry James (1843–1916) was an American novelist, a 19th century master of literary realism, a movement to portray ordinary lives and situations devoid of romanticism or stylization.

Born in Manhattan to a prominent family, Henry James traveled extensively, and eventually settled in England. The cultural differences between Americans and Europeans were a favorite subject of his.

"Mr. Henry James...has given us more, and more finely, yet strongly, differenced heroines than any novelist of his time, but at the mention of his name a single creation of his will come so prominently to mind that Daisy Miller will for the moment make us forget all her sisters." (William Dean Howells, Heroines of Fiction)

What listeners say about Daisy Miller

Very good for its time.

Where does Daisy Miller rank among all the audiobooks you’ve listened to so far?

This particular version of the audio book stops in several -seemingly random- places and plays music for a few seconds. It's quite weird, but not too disruptive.

The language was pretty modern for the time it was written. It was very easy to read.