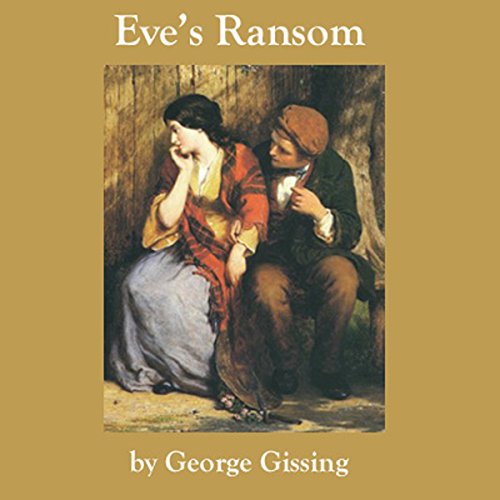 George Gissing was an "author's author", widely known by the literary greats of his era. However he did not achieve popularity with the general public until after his death.

Eve's Ransom, written in 1895, is the story of a bizarre triangle of love. An educated but unsuccessful man, Hilliard, is trapped in grimy Birmingham until he receives a totally unexpected windfall. He goes in search of a woman whose picture he had seen in his landlady's photo album.

Typical of most of Gissings books the setting is autobiographically faithful and the theme is freedom. The writing is crisp, the narrative swift in this, as H. G. Wells said, "the best and least appreciated of his novels".

"Gissing was not a writer of picaresque tales, or burlesques, or comedies, or political tracts: he was interested in individual human beings, and the fact that he can deal sympathetically with several different sets of motives, and makes a credible story out of the collision between them, makes him exceptional among English writers." (George Orwell)

What listeners say about Eve's Ransom

but the plot was rather stretched. i knew how it would end by the first third of the book. and by the middle i was so irritated by the book i called it up on project gutenberg to see if i was right. i was and did not bother finishing it. Though Gissing could put a sentence together with the best of them, the plot is unbelievable, the characters act in fake ways with no preparation whatsoever from the author.

a note about the reader. she has a nice voice and did the accents fairly well, but the way her sentences continued to drift into monotone was very annoying. a mediocre book needs a great reader to pull it off. while she could do the voices, i often had the feeling i was listening to someone off Librivox. (who i endlessly admire for giving of their time, but who do not attempt to make money off their unprofessional audio recordings.)

if you are looking for something richly written, great plot, great reader...this is only one out of the three. if only dickens had written just a bit more, or gaskell, the brontes, george eliot? the reason Gissing is not mentioned in their company becomes clear in this book. all in my opinion...

This is a story of a boy and girl being slowly sucked into to the murk and grime that is industrial Birmingham, inch by inch losing their souls and humanity. The boy received a windfall which he used for a while, for women, drink and song. He is my kind of guy. His priorities belong to a guy. It is all understandable. What comes next is not. He did the most inexplicable thing even inexplicable to himself. He paid for a trip to Paris for her and her friend and did not ask for anything in return. During the months in Paris, the girl regains her soul and humanity becoming obligated to the boy.

Honor, obligation, gratitude and love in a complex mix are the issues with which Gissing's triangle deals and perhaps seem strange to our modern sensibilities of into bed then onto the next meaningless bed. I understand Hilliard completely. He like Mr. Darcy, met a beautiful woman, recognized her superior qualities then promptly and passionately fell in love, all the while, unlike Darcy, knowing she didn't return his love. Yet, there is an element of purchase in his behavior toward her. Eve is more difficult. Was she an Isabella Thorpe (Northanger Abbey) stringing along one man while trying for a richer? No, I don't think so. Security, fear, gratitude, love and friendship are part of her mix. Then there are those tiny indecisive steps one after another which decide. In the end, she is a very attractive heroine but doesn't he have an obligation to let her go even if it was his money which had made possible her new self, her ransom?

I can't believe I finished this

What a tedious story this is. At the center is a man's fascination for a woman (Eve) and his trying to figure out what's going on with her. Eve is an enigmatic figure but all surface. Her deceptions lack a motive sufficient to keep this narrative moving.

What was most disappointing about George Gissing’s story?

Lack of invention, monotonously conceived characters who don't change much. They learn a little, maybe, but not enough to warrant a novel. In conception, it's more like a tale. It's a lttle like Henry James-- if you can imagine James writing on a day when he suffered a concussion.

There is no way the performance could have been better unless the reader were different. This reader sounded like she was in a trance and reading to an audience of zombies. One of the worst.