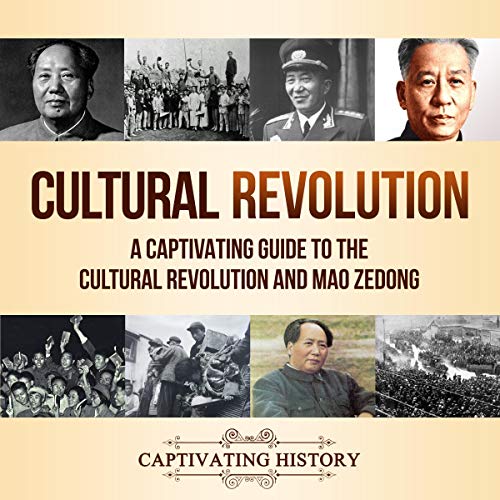 By: Captivating History
Narrated by: Jason Zenobia,Duke Holm
Try for £0.00

If you want to discover the captivating history of the Cultural Revolution, then pay attention...

Two captivating manuscripts in this audiobook:

Some of the topics covered in part one of this audiobook include:

Some of the topics covered in part two of this audiobook include:

So, if you want to learn more about the Cultural Revolution and Mao Zedong, scroll up and click the "buy now" button!

What listeners say about Cultural Revolution

I read other versions and it had wrong letters, extra spaces, things like that. I understand that in some older books with a more modest audience, but it does not seem right for this publisher. I have to admit I would like to have seen a conclusion about the winding down of the Cultural Revolution, given its importance.

It is detailed and at the same time, its compression can make the sequence of events a little confusing at times - I mean, because of the ways. This came up a couple of times for me but the one I actually remember was not really following Mao's shift to a military leader. That was kind of sudden in this audiobook.

I don't know anything about Mao, and I've been studying long books, so this was pretty much what I was seeming for, something abstract. If you're in the same vessel, just getting started, this might be the audiobook for you, since it is longer and more detailed than an online article.

A Man With Great Ideas.

It’s brief, 5 hrs and 11 mins, and fairly concise. I myself wasn’t ready to listen to the over 5 hours of audio on this subject, so in that sense, this is kind of a great audiobook - you can learn some about Mao, China, and the beginning of communism across the 20th century, but not be confused or bogged down in excessive detail.

A very accurate account of an astonishingly intense period in contemporary Chinese history. It is the most obvious recounting I have seen of this confusing era.

An excellent. A window into Hell. Inhumanity and confusion were arranged by Mao to solidify his power.

This is informative, this is an important audible by a brilliant team of authors and historians. It is a window into hell.

Incredible History of a Dark Period

It is a very interesting and very influential audiobook. Many similarities between China's Cultural Revolution and what is starting to be seen and currently encountered in the USA today. Very easy to follow and informative at the same time. Highly recommended too.

One of best from Captivating History.

Another fine work by the Captivating History team that wraps up the beginning of the current Chinese administration. The Cultural revolution mainly started through an effort by Mao to recover power and influence.

Wow, what an enlightening audiobook on China! The author’s equitable use of individual stories and hard statistics make this book a must-have. It took me a bit to get into it, but once I started I could not stop. I highly recommend this to anyone seriously interested in China.

Mao was a man of goals, unbelievable courage and determination, and influence. He united China and raised the status of women superbly. He was a visionary until he seized power, then for a fraction of a century, he had no idea what to do with it and nearly slaughtered all his work. Spence shows all this interestingly and convincingly. I clearly learned a lot about both sides of this dubious man.

I now need to set off and see something other than the footnoted sources to the major events of the great leap forward and the cultural revolution. but good coverage of his youth.

The author's effort was in-depth and well-researched life into the life of Mao Zedong. It represents him as a revolutionary who let the power and paranoia get to his head, changing him from a freedom-loving scholar to an absolute anti-intellectual leader.

The audible is dealing with Mao in power after 1949, is anyhow less interesting – sometimes it looks like things are just following, mostly bad things, and as Chairman, he sometimes appears to be not extremely complex. Overall, the audiobook feels like a good introduction.

A concise sketch of Mao's life

Not knowing enough about China and the history of Mao Zedong except the very basics, I pulled this audiobook up to learn more. The first half concentrated on Mao’s early life and struggles the most exciting. It’s slightly astonishing how an intellectually inquisitive farm boy eventually ended up as the leader of all China, really well done.

It is very impressive, comprehensive, full of data, and not boring too. I've been to China multiple times and this audiobook told me things I did not know at all.

Captivating History has done serious work about Maoist China that is extremely well researched and has some very eye-opening information about the years when China was closed off to the rest of the world. It is a difficult read, but worthwhile.

Challenging work but worth it

The work is great but the only point of controversy is its weakness to contest some of the ideological reasonings provided by Mao in answer to imperialistic failure that may have sparked Mao's fear. Other than that, extremely well composed and highly recommended!

A very informative and well-created audiobook on a piece of history is not really discussed deeply in many historical chronicles. This piece is widespread with reliable research behind it.

What an amazing audible about an amazing person. I cannot think of living the life he has....and coming out alive, but if you want to create history, you will have to be like him.