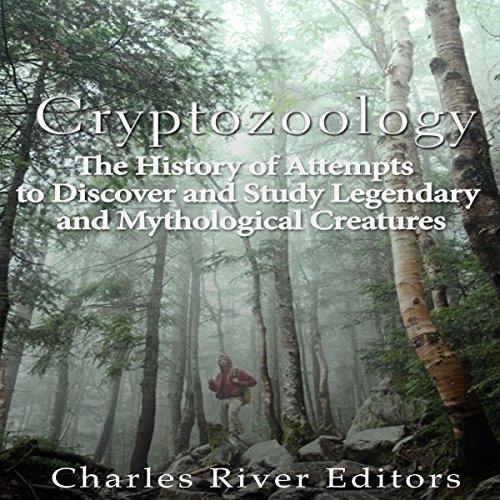 The History of Attempts to Discover and Study Legendary and Mythological Creatures
By: Charles River Editors
Narrated by: Kenneth Ray
Length: 1 hr and 35 mins
Categories: History, World
4.5 out of 5 stars 4.5 (2 ratings)

Mankind has always been fascinated with the hidden, the mysterious, and the unexplained. Every society has its tall tales and ghost stories, its odd legends and heroes. Also, every society has its stories of strange beasts, dangerous or benign, that live in the twilight world between the everyday and the legendary. Through most of our history we have been closely tied to nature, hunting in forests and having an intimate knowledge of the animals in our region. So-called "primitive" peoples were walking encyclopedias of the natural world, and yet most believed there were more creatures lurking in those woods than the ones they usually encountered. In modern times we have lost our ties to nature, but the belief in strange creatures continues as strong as ever.

it was very enjoyable and I have learnt new things! however one point that bugged me is that Pterosaurs are not a type of dinosaur, they lived along with them but are they're own species. dinosaurs AND pterosaurs

If you're like me and love all things cryptozoology, you totally need this book! Not too short, not too long. Each chapter offers a new category of creature and plenty of details. descriptions. and accounts of sightings. I really loved that it included exact names, dates, and locations of the sightings as well. I enjoyed that unlike a lot of similarly themed books, this one took on a casual yet educational approach. The author didn't waste time speculating and contaminating the content with his own thoughts and opinions. Very nicely written and narrated. Well worth the price!