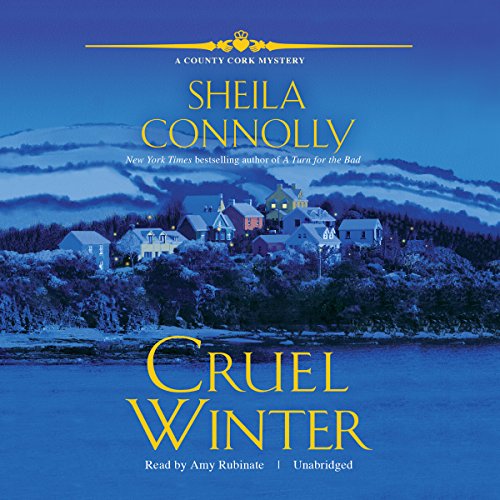 Snow is a rarity in Maura Donovan's small village in County Cork, Ireland, so she wasn't sure what to expect when a major snowstorm rolled in around Sullivan's pub. But now she's stranded in a bar full of patrons - and a suspected killer in a long-ago murder.

Maura's been in Ireland less than a year and hasn't heard about the decades-old unsolved crime that took place nearby, let alone the infamous suspect, Diane Caldwell. But the locals have, and they're not happy to be trapped with her. Diane, meanwhile, seeks to set the record straight, asserting her innocence after all this time. And since no one is going anywhere in the storm, Maura encourages Diane to share her side of the story, which she'd never had a chance to do in court.

Over the next few hours, the informal court in Sullivan's reviews the facts and theories about the case - and comes to some surprising conclusions. But is it enough to convince the police to take a new look at an old case?

Not up to Sheila Connolly's usual standard

This audio book is 7 & 1/2 hours long. Unfortunately, there were only about 2 hours of story here. The author starts with a storm and a mysterious woman in the bar. Then she proceeds to tell the woman's story over, and over, and over and over again. I got so sick of Maura "reviewing" or "summarizing" the facts in her head and to the group that I could have smacked her one. There was zero advancement of the series ongoing story of romance between Maura and Sean or Mick, an infinitesimal bit about Jillian and Harry, a tiny bit about Maura wondering, (but not deciding) what to do with the bar, and several repetitions of praise for Rose's cooking. It's like Ms Connolly had an idea and a deadline, so she just repeated her material until she had enough words down to call it a novel. Don't waste money or a credit on this. Buy the paperback and read the first two and last three chapters, and you will get the gist of it.

All talk, no action

I loved the earlier books in this series, but this one was a huge disappointment. It was slow, very repetitive, and the entire story is based on people sitting in a room talking about something that happened 20 years earlier. It was painful to get through.

I really love this series, but this book was not the best in the group. It dragged and was repetition. I hope the next one is a bit better. I do like Amy Rubinate's performance.

I enjoyed this one more than I expected

It was interesting listening to the "trial" as they discussed various ideas and facts. Maura seemed more mature now and whined less about the little money they had and the little time she and her grandmother had to visit and get to know each other when she was growing up. I was tired of her blaming it for everything that she didn't understand or why she acted the way she did. I missed the interactions with more of the residents, but understand why the story was written this way. I really like the narrator.

I enjoyed the first four books of this series. However, it was a bit difficult to get through this one. The characters and the mystery were well developed and entertaining, but, the story was repetitive and lasted longer than necessary. I hope the next one is better. It's also time for Maura to develop more.

This is another enjoyable addition to this interesting series. The story, characterization and narration are very good and worth a listen.

Ms. Connolly has Irish Blarney in her blood, being of Irish descent just confirms it The Irish are Master Storytellers.
All of her stories in this series are low key, slow to develop and the finally, though once again low key, is very satisfying.
Maura Donovan can be very naive, a bit to preachy and self righteous but it is all done out of love of heritage, her employees and above all justice.
If you have enjoyed the previous books in this series, you won't be disappointed.
I do love her resourcefulness in tackling her obstacles. I've been married for 30+ years but prior to that I had quite a few obstacles of my own as a long time single woman. I like how she determines what her problem is and does the best she can do with what she has.
Now, what I wish for Maura Donovan:
MAKE UP YOUR MIND ABOUT MICK OR SEAN ALREADY!!!!
She's can be such a dreary sad sack, a pessimist and an all around downer. I would like to see her character evolve more. Yes I know it's only been 9 months but give her some freaking joy in her life already.
SPOILER ALERT!!!
For those of you looking for more joy and romance in Maura Donovan's life, you will be very disappointed.
BUT IT IS STILL A FIVE STAR STORY AND MS. RUBINATE AND MS. CONNOLLY ARE A MAGNIFICENT TEAM❣

The concept of the story was interesting and I was listening to it while in the middle of a snowstorm. It should have been ideal. But although I have enjoyed the earlier books, I am frustrated that the main character. She just doesn't seem to mature.
Will she ever stop having inner dialogues? Will Maura review the plot line one more time? Must she go on about being accepted? Will she ever learn to think properly and not just ask a series of questions? The questions, the questions...If I had a print copy I would have counted them. Surely there is a better way to move the plot and to develop the character.

Solving a murder while snowed in

Cruel Winter, book five in Sheila Connolly’s County Cork Mystery series, Maura Donovan, owner of Sullivan’s Pub, opens the Irish pub on a day when the worst snowstorm in years is due to arrive. As customers trickle in, before long, they all find themselves snowed in. Most are locals who know each other, but one woman from England, Diane Caldwell, comes in because she can’t travel due to the storm. Soon, Mick Sullivan, one of Maura’s employees, privately points out to Maura that Diane was the chief suspect in a notorious murder 20 years earlier. Soon, everyone in the pub is whispering with suspicion and fear about Diane. But though Diane was interrogated several times for the murder, she never was even arrested yet has borne the stigma of the crime for all these years.

Maura suggests that the people in the pub spend their evening snowed in by holding an unofficial, impromptu trial of Diane to allow her to air her side of the story. The group begins with most people presuming Diane’s guilt, but they agree to discuss the murder of Sharon Morgan and see if they can find some answers. So as the snow falls and locks them all into the pub, they create their own inquest.

Cruel Winter comes with a creative premise, a unique variation on the locked room mystery. It has an interesting plot, but at times it moves a little slowly. The parsing out of the case can get bogged down periodically. However, I enjoyed the development of the plot as it unfolds. The flavor of Ireland comes through clearly, especially in teaching readers about the legal system, both of the courts and the investigative branch.

Amy Rubinate performs the audio edition of this book, doing an effective job of making the book come alive. This is especially true with Rubinate’s convincing accents of the Bostonian Maura, the English Diane, and the Irish other characters. The portrayal of the informal trial makes these scenes more interesting.

I appreciated listening to Cruel Winter, though at times things got a little tiresome. With all the action’s having taken place within one setting over the period of a day and night, the book does a good job of keeping my attention for the most part, but at times I got a little bored. Overall, this book was very interesting, and I give it four stars.

A wonderful fictional twist on the real life murder of Sophie Toscan du Plantier in West Cork more than 20 years ago. Keeps you engaged and wanting to know how the tale will end up. The performance by Amy Rubinate is nothing short of superb! Such a well done story and performance!