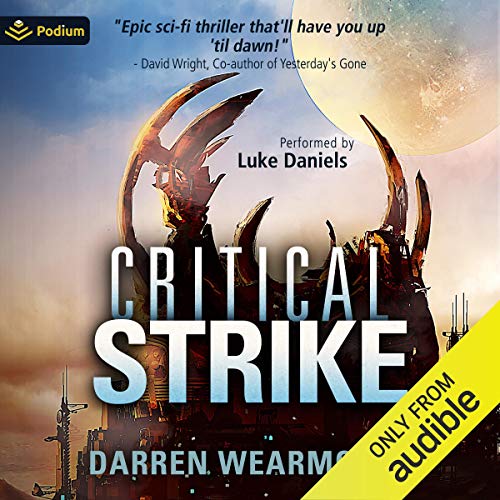 A fight for survival in an alien world.

Revenge is planned against Unity. Denver, Charlie, and Layla are trapped in the middle of a galactic conflict that has spanned across many millennia. With no immediate allies on either side, they must use all of their skill and strength to stay alive and to find a way back to Earth - if there is one.

An old enemy of Unity is intent on making them pay for his humiliating treatment. He's gathering forces to the south with vengeance in mind. Mike and Mae must work together with the citizens of Unity to find a way of repelling Augustus' force - or face extinction at the hands of the old emperor.

What listeners say about Critical Strike

Wow this book really susprised me. This was a good but all 3 books you will not regret it.

The critical strike series is a fantastic series read by Luke Daniels who is on my top list of favorite narrators. I recommend this series!

I thoroughly enjoyed listened to the 3 books in this series, the vision of foreign planets and species, etc... I sincerely hope that there will be more stories of Denver forthcoming.

The story raised questions I think this series would benefit from a prequel to better tell the background story. Also I wonder are they going to continue in a different series Denver's story? Too many questions but beyond that the third book in the series held my attention. I want to know where does Denver go? I want to know more about the other earths. As I said too many questions at the end of the story

I honestly have no idea why I keep listening.

The first book was promising for the first hour, and it's been completely downhill from there. Maybe I just want to know if Denver achieves manhood.