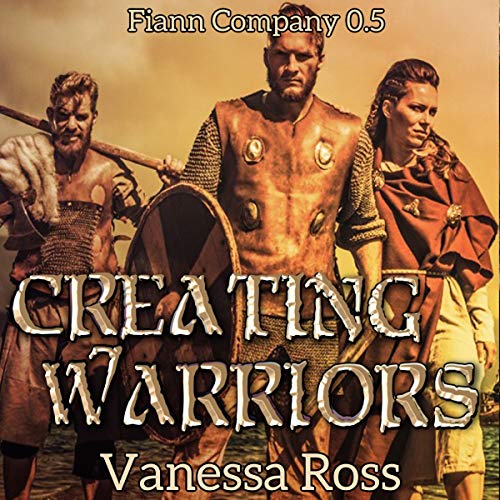 This story focuses on the parents of Kendrix and Kai. This takes place during the first war between the humans and the supernaturals. He is a human soldier fighting for his life. She is a farmer's daughter pretending to be a man so she can fight. As death is ready to claim them both they are chosen for a destiny that may kill them in the eyes of their family.

This series focuses on the three goddesses theme of mythology. However the goddesses are from different pantheons; Celtic, Egyptian, and Native American - Morrigan from Celtic Pantheon, Qetesh from the Egyptian pantheon, and Hanwi from the Native American pantheon. Morrigan leads the Fiann Warriors, an ancient band of traveling warriors. The warriors must fight to live and live to fight.

not my normal read but compelling

I wasn't sure about this to begin with but it drew me in and I was compelled to keep listening. I liked the characters and story, but feel the story could be stretched out a little more.

This story seems to be a set for a series, sounds like it will be an amazing series. The narrator has a unique way with accents and each character seems to have the characters their own unique accents. This book has love and heartbreak. The story has many twists and turns throughout the story.
I definitely recommend this book.

Had some flaws, but it was interesting

This listen was pretty enjoyable despite the its flaws. It was engaging and interesting and I am curious about the next books in the series.

As far as the story goes, I enjoyed it. There were some occasional things that felt out of place, like phrasing choices that felt like they were too modern for the situation.

Narrating was pretty good. The accents are not the most smooth sometimes. When the main characters are the focus it sometimes starts sounding Russian, then Indian, then something I don't have a word for on occasion, but the narrator was capable of doing many different accents.

Overall I enjoyed the story. I received this audiobook for free in exchange for my honest review.

This story gives you the background on how and why the warriors were created. Full of drama and an everlasting love. This story makes you want to read the rest to see what happens next.

Went forward fast in time. I wish it had more to it, but loved the storyline.

Really enjoyed this story. Had great characters and an interesting plot. And I really liked the narrator! worth a listen

Setting up a series

I'm assuming the purpose of this book was to set up a new series. I haven't read any of the other books in this series, so I can't tell you how necessary or relevant this books is. This book did the job of making me want to know more about what happens to these characters. I'm planning to read at least the next book in the series. This book, though, was a bit rushed. A lot happened in a very short amount of time. There was a lot of story and information that was stuffed in to a very short book. As a result, the story suffered a bit. This tale revolves around 3 people who love each other very much. At least that is what we, as the audiance, are told. That is one of my main issues with this book. We are told how much they love each other. We aren't shown how much they love each other. There isn't enough time, the book was too short. I'm hoping that in longer books going forward that won't be a problem. I like being shown how characters feel and experiencing things with them. There really wasn't enough time to grow to care about these characters and become invested in there lives. I hope that changes. Still, I'm curious enough to want to know more and see where they go from here. Crossing my fingers for the next book.

This was an unusual story. It has a lot of troubles in the heroine and heroes path. The beginning is rough and raced through so a little hard to understand, but goes at a better pace towards the middle and end. The narrator did an accent that was hard to understand at first and didn't identify the different guys voices very well so became confusing when it switched but I didn't know. The story had a great plot and was an interesting look at supernaturals, I am just not a fan of heartache.

I liked the book. The pacing was a little fast at first but at the end I was invested in the story and Characters. I really want to listen to the next book

Creating Warriors: Fiann Company by Vanessa Ross is a short story and the start of what I think will be a very interesting series. It is an age 18+ story due to explicit love scenes, language and mild violence. It is well narrated by Samantha Brentmoor whose accent made it an enjoyable listen. I gave the review 4 stars due to the conflict I had with some of the phrases in the dialogue compared to the time setting portrayed. Still I found the story entertaining and engaging. Characters were well developed along the storyline and built anticipation for the upcoming series. As it said in the story: “Hold on tight, things are about to get very interesting”.

With the prophecy told it stabs a little, but you follow the characters on their journey as they move closer to the endgame. You're left wanting more and can't wait to see what happens next. I'm happy to see the characters accept the challenges they are given and make the best of their situation. The book fills the few hours with much detail and the mature contact excites you without pulling away from the story.

I loved every part of the book. The ending had me tearing up and running for the next book in the series!!!