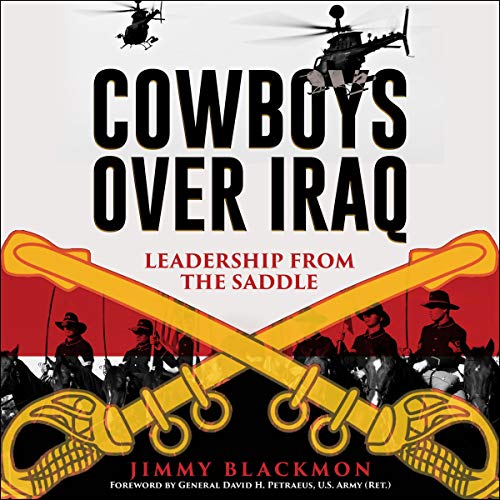 Cowboys Over Iraq tells the amazing story of leadership, innovation, initiative, and a brotherhood that was forged in the crucible of combat during the invasion of Iraq.

"What does it take to fly and fight with America's Air Cavalry? That's the story of Cowboys Over Iraq. You'll meet bold personalities right out of a Hollywood movie. You'll be right there as Jimmy Blackmon and his fellow Cavalry troopers track down and tangle with determined foes. You'll experience the highs of triumph and the lows of bitter loss. Most importantly, you'll see how and why Jimmy Blackmon learned hard-won leadership and battle lessons in the deadly skies of Iraq. Strap in. Hang on. Get ready to go hunting with the Air Cav." (Daniel P. Bolger, lieutenant general, US Army, Ret.)

"A great [book] by an exceptional combat aviator, leader, and writer! Jimmy Blackmon captures brilliantly the enthralling story of the air cavalry unit that was the eyes and ears of the 101st Airborne Division (Air Assault) during the fight to Baghdad and throughout the first year in Iraq." (General David Petraeus, US Army, Ret.)

What listeners say about Cowboys Over Iraq

Awesome depiction of the life of an air CAV trooper

This was an amazing story. I lived many parts of this story and I know almost all of the people mentioned in the book. I could see all of the places mentioned because I had been there. Well worth purchasing. The only problem I have is with the performer reading the story. He mispronounced names, places and had no understanding of military acronyms.

While nothing compares to hearing an author speak their own words, Shawn Compton did an excellent job telling these stories of camaraderie, bravery and practical jokes. There were many parallels to civilian life and Jimmy Blackmon was gracious enough to leave space for us to make those connections ourselves as he recounted his time in Iraq. You feel the respect Jimmy holds for his team and his recollections of his life to that point in time consistently add texture & value to the story. Well done!

COL Schiller was truly one of the greatest!

An excellent story about 2-17 CAV and its extraordinary troopers at the beginning of the war. Even more spectacular is the story of COL Steve Schiller. An superlative combat leader who inspired and mentored an incredible number of successful Officers and NCOs. He should have been a four star General.