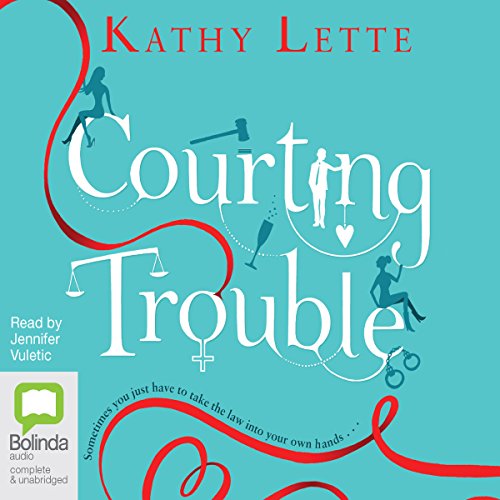 Tilly has the day from hell when she's sacked from her barristers' chambers in the morning, then finds her husband in bed with her former best friend in the afternoon. She escapes to her mother, Roxy - a sassy solicitor whose outrageous take on men, work, and family life is the despair of her more conventional daughter. Roxy comes up with a radical plan for their future - they'll set up an all-female law firm which will only champion women who have been cheated, put upon, attacked, ripped off, or ruined by the men in their lives.

In court, Tilly finds herself up against Jack Cassidy, the smooth-talking, politically incorrect, legal love god who broke her heart at law school. Jack is fluent in three languages - English, sarcasm, and flirtation...but if he's so loathsome, then why is she committing Acute Lust in the 3rd Degree?When a case lands on the doorstep that threatens to change all their lives, Tilly finds herself dangerously close to taking the law into her own hands.... Will Jack's cunning ways and expertise in emotional break and enter derail her quest for justice? Or will the women take on the boys...and win?

Kathy Lette can make even the toughest subjects funny.' - The Lady

A book of many parts

I really should keep my 5 star scores for something special - this was something really special. I wish I could give it 7.

I bought this as I am enjoying Jennifer Vuletic's reading but this story was so much more. A very difficult background story handled with just the right level of sobriety before it had you laughing out loud. The characters are so well done you can picture them clearly as you listen with the feminist Aussie 50 something, lawyer mother with the "I'm not like my mother" prim, barrister daughter. Rox is a riot with a heart of gold getting so close to her clients that she opens her house to them.

Please let this be the start of a series.

I stuck with this after I lost interest at the halfway mark and it came good again towards the end. Some of the dialogue sounds contrived - it is probably witty when being read, but when actually spoken can sound long and unrealistically clever. The narrator does a decent job ,albeit with an exaggerated style in parts - Jack comes over as a caricature of smooth urbane and Nathan sounds like Joanna Lumley. A good dash of social commentary adds spice and weight .Overall entertaining listen

What would have made Courting Trouble better?

I understand where the author was trying to go with the characters and tying things together, but had she chosen a different plot "crime" topic, it may not have been so disturbing and offensive. There was nothing funny about any of it. She tried with a couple characters trying to ham it up, but it just seemed so inappropriate. It was as though it needed to be either a light comedy type book (nothing romantic about this story) or a legal mystery story.

Has Courting Trouble turned you off from other books in this genre?

What genre? I don't think it knew where it belonged!

What character would you cut from Courting Trouble?

The pr for the book says Amal Clooney the inspiration. How? Where? Why? I'll give you that the author has a pithy tongue and the story is clever. After many heavy nonfiction books I felt I needed an entertainment book so I listened. The accents are beguiling for the women but aside from Jack the males voices felt weak at times. I had problems with lack of forgiveness and I had figured out the bad fellow early on and it felt forever for the resolutions to occur. If only all our lives could come full circle
and the good guys forever win. We are left with having to wait for the next book to see if the protagonist, George and Amal, I mean Jack and Matilda give into love?