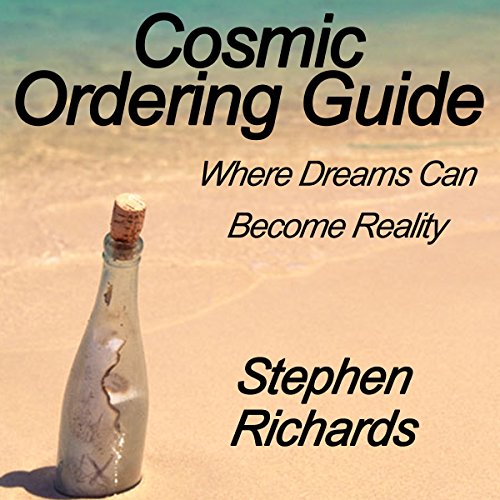 By: Stephen Richards
Narrated by: Craig Beck
Try for £0.00

The new age phenomenon called Cosmic Ordering is not as new as some might believe. Media coverage relating to how UK TV presenter Noel Edmunds highlighted his renewed success has prompted the author to be brave enough to admit to how Cosmic Ordering (United Field Theory) has also worked for him. The author, on first learning about this, was very skeptical, trying other beliefs first and then eventually this worked for him, and now he is a devotee of the cosmos.

Learn how to fast-track your wishes and create a direct link to the cosmos. The author provides irrefutable documentary proof of his rags-to-riches success story, claiming to have won GBPs in a few months and reveals how Cosmic Ordering turned his life around from having no money at all to becoming a property developer, author, TV consultant, radio broadcaster and as a result is wealthy beyond his wildest dreams. Now, after years of studying, he has fine-honed his cosmic connection technique and says, why wait for the winning lottery number? Following my guidance, you will find you can achieve almost anything.

I thought I was getting a book on positive thinking to manifest great things into your life; what I actually got was a depressing tale of this guys life. I mean don’t get me wrong, this guy has had it tough but I didn’t sign up to hear a story about abuse, domestic violence, rape, racism, suicide and brutal bullying!!! I wanted a book I could listen too whilst falling asleep!!! I struggled through till half way, hoping to hear about actual cosmic ordering, but when he started ranting on about premonitions and train crashes I decided enough was enough!!! And why the hell does he keep saying Stephen Richards?! He says it every few paragraphs randomly!! Very strange book. I would not recommend if you want to know about cosmic ordering! Although If you want a harrowing tale, then this is the book for you.

Strange and quirky - not well written

This is a strange book.

I have a couple of hours left in this, and still cannot work out whether it's good or whether I'm wasting time.

I tried to listen to other books by this guy but wasn't happy with the choice of narrator; in this case I'll make an exception as I like the reading style and voice of Craig Beck - he delivers well.

The content however, well it's a bit difficult and odd -- it starts off as a depressing listen, full of woes and failures that you can barely hear without falling into negativity.

Then, after a couple of hours it starts to get into the nitty gritty -- some of it good, some of it trite and some of it you would have heard before. There are some good ideas contained within, but it seems to fall short in many areas. For example, if you're not in a positive place it isn't that easy to just conjure one up, and there's no real help with that.

Also, the author keeps quoting himself in little sound bites: "blah blah blah - Steve Richards" seems to pop all the time, like the author is celebrating his own quotes as if they're something profound. Very strange and somewhat annoying.

I like the term "cosmic ordering" and am already familiar with the term "law of attraction". This is just more of the same.