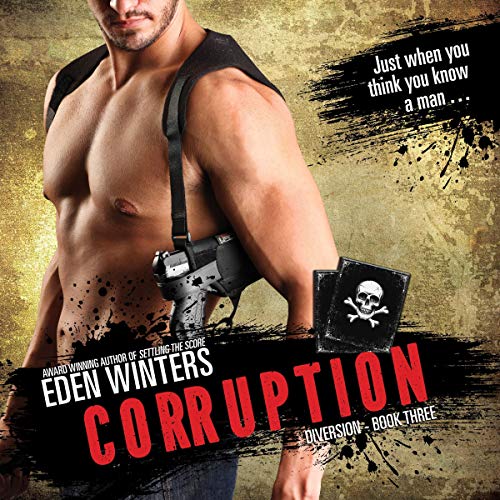 Renegade biker. Drug runner. Recovering addict. Wanted by the Southeastern Narcotics Bureau. But he isn’t a crook, he’s the law.

SNB Agent Bo Schollenberger’s solved his cases using his brains and not a gun, and with his partner, not alone. Now he’s handed a tough new case involving designer drugs that turn users violent. One false move could end his life as he immerses himself into a motorcycle gang to locate the source. His fate depends on how well he can impersonate someone else. Someone named Cyrus Cooper.

Cyrus is everything Bo Schollenberger isn’t, including the badass enforcer for a smuggling ring. He establishes pecking order with his fists and doesn’t take shit from anybody, not even the undercover agent who comes to help his case.

Simon “Lucky” Harrison’s always been the best, whichever side of the law he was on. Former trafficker turned SNB agent, he damned well ought to be undercover in this motorcycle gang, instead of hanging around the office going crazy with new policies, new people, and “inter-departmental cooperation” that sticks him in a classroom. Yet he’s passed over for the SNB’s biggest case in decades in favor of the rookie who shares his bed. A man Lucky thought he knew.

When survival depends on a web of tangled lies, lines blur, worlds collide, and a high stakes game turns friend to foe. Lucky knows the difference between Bo the agent and Cyrus the outlaw, but does Bo?

What listeners say about Corruption

Darcy Stark is the perfect narrator for this series, and Redemption has just come out on audio too. I just love his interpretation of Lucky, Bo and Walter and Johnson has a wonderful Texan twang. Great audio.

4.5 stars. Loved it, but hope Lucky pulls his head out of his a**e soon. Bo is worth so much more than Lucky is giving him at present...and I'm really sorry it's taken me nearly 6 years to read this 😔.

If you haven’t read the first two books in the series, you really should go back doing that. It’s not that you won’t be able to keep up with this book if you haven’t but you’d miss the chance of getting to know Lucky and Bo; the significance of Achy Breaky Heart, why Lucky has such a hard time with affection or feelings really. So while the story in this book might stand on its own, Bo and Lucky don’t. At least not to the same extent. On a side note, I just looked the song up and I have to wonder at the miracle that Lucky is still alive, that none of his partners didn’t just break down and strangled the man. But I guess that miracles are miracles for a reason ;)

Corruption can kind of be divided into two parts. The first part is where Bo gets undercover training – and not from Lucky, but from an actor. Well, a former NYPD cop as well, but Lucky decides to ignore that part. Lucky too is sent to these seminars, or classes if you will, ones he very reluctantly attends. He soon realises that not only does he see the results in Bo’s behaviour he also reluctantly starts to pay attention to what’s being taught. That maybe there is some value to what O’Donoghue is teaching after all.

This part is also where we have the most interaction between our two men. Bo is trying to take them a step forward in their relationship and Lucky freaking out (as usual) about it. Nothing ever moves quickly with Lucky, we’re talking relationships and feelings here – when he’s on a case he never slows down for a second. Anyway, he’s careful, mulling things over, but he’s also scared and often oblivious (in an endearing way). I admire Bo’s patience dealing with Lucky, because often he’s ending up getting hurt or at the very least dented. There is a connection between them and I love to see them working on it, I believe in them because they feel real. It’s not perfect or flawless, but a bit messy with its ups and downs.

🎧 I love you. Nothing's going to change that. But sometimes loving someone isn't enough.

For the second part Bo is sent on an undercover assignment. A new drug, called Corruption, is hitting the streets and SNB together with some other agencies want to find the source of it and shut it down. It’s a long-term assignment and a dangerous one and for the duration there is no contact with any one he knows, including Lucky. When Bo’s handler and ends up in the hospital and their contact killed Lucky is sent in as a driver to assist Bo in the operation. Only when he gets there Bo is so far undercover that even Lucky has a hard time recognising him, making him wonder if those classes worked a little too good.

The second part has a faster pace to it, it’s more intense, darker and grittier. No fuzzy feelings or talks about relationships. The focus is on getting intel without getting made, but more importantly getting out alive. Reading stories like these makes me appreciate the men and women doing these kinds of jobs, going undercover, risking their lives, never really being able to just be themselves for a while. In the interactions between Bo/Cy and Lucky you can see how much Bo is struggling, what it costs him to become Cy, losing bits of himself, a bit of that shine he’s always had.

Darcy Stark was great, just like with the previous two books in this series. I especially liked his interpretations for Bo and Cy. The same yet not. It really came through in the narration, you heard and felt the difference. Felt Lucky’s worry over it. There’s just something about Darcy Stark and this series that just clicks for me.

This book ends with a bit of a cliffhanger, not one that you’ll lose your mind over (for which I’m eternally grateful), but still one you need the answers to. I hope the wait for Manipulation isn’t too long.

An excellent edition to the series. Bo and Lucky's relationship is changing both in their personal and professional life.

Eden Winters does a wonderful job of showing her readers how a person can evolve and grow. I really enjoy watching Lucky turn into a stronger and more compassionate person with Bo's influence.