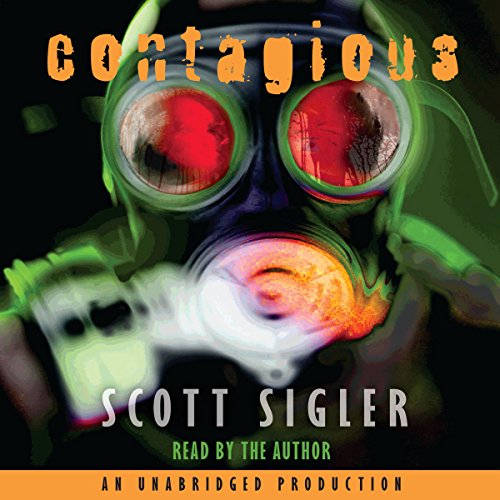 From the acclaimed author of Infected comes an epic and exhilarating story of humanity's secret battle against a horrific enemy.

Across America, a mysterious pathogen transforms ordinary people into raging killers, psychopaths driven by a terrifying, alien agenda. The human race fights back, yet after every battle the disease responds, adapts, using sophisticated strategies and brilliant ruses to fool its pursuers. The only possible explanation: the epidemic is driven not by evolution but by some malevolent intelligence.

Standing against this unimaginable threat is a small group, assembled under the strictest secrecy. Their best weapon is hulking former football star Perry Dawsey, left psychologically shattered by his own struggles with this terrible enemy, who possesses an unexplainable ability to locate the disease's hosts. Violent and unpredictable, Perry is both the nation's best hope and a terrifying liability.

Hardened CIA veteran Dew Phillips must somehow forge a connection with him if they're going to stand a chance against this maddeningly adaptable opponent. Alongside them is Margaret Montoya, a brilliant epidemiologist who fights for a cure even as she reels under the weight of endless horrors.

These three and their team have kept humanity in the game, but that's not good enough anymore, not when the disease turns contagious, triggering a fast countdown to Armageddon. Meanwhile, other enemies join the battle, and a new threat - one that comes from a most unexpected source - may ultimately prove the most dangerous of all.

Catapulting the reader into a world where humanity's life span is measured in hours and the president's finger hovers over the nuclear button, rising star Scott Sigler takes us on a breathtaking, hyper-adrenalized ride filled with terror and jaw-dropping action. Contagious is a truly grand work of suspense, science, and horror from a new master.

"An inventive, amped-up yarn . . . full of pressure-cooker mind games." ( Entertainment Weekly)
"Riveting . . . leads the reader from one startling detail to the next . . . a terrifying page-turner." ( Publishers Weekly)

What listeners say about Contagious

Can't recommend this enough, I listened to the first book as a Podcast "infected" and I am buying this one. Great listen, every chapter leaves you desperately waiting for the next one!

Even better than the first book.

Less "horror" and more "disaster" movie than the first book. Scott has done a fantastic job building the characters and plot twists. His reading of the story is great too. I also loved the obvious amount of scientific research he has done in order to write the book.

An excellent follow-up to infected

I thought that Infected was pretty good and the production very good.

Basically if you liked Infected, you'll love Contagious, it really does take things to a whole new level.

I found that there was a more Micro focus in Infected and then a very nice transition into a more Macro (big-picture) story-line with a healthy performance and development from the main stars of the story.

Very much worth a listen.

Gets better with every listen

I absolutely love this trilogy. This one is my favourite and I love Siglers performance.

read by the author and actually ... quite good!

I was surprised at how well the author read this and how engaged in was by it.

if you like zombie trope books then give it a go.

Good to hear an author ready his own work! Really enjoyed it and your female voices!!

Sigler does it again!

Truly chilling. The only thing I didn't like about this book was that it ended.

A work of sheer brilliance. It had me gripped from minute one! Had to come back and get Infected straight away (literally - they are both infectious!!!)
Genius!!! When's the next offering due and why has no one made this into a film????

This is my third or fourth listen through this book. simply amazing it's scope scientifically details beautiful characterization and what a journey, fantastic conclusion. On to the last of the series...

Not as enjoyable as infected....felt a little like a chore listening to it....by the end.

Listened to this book in one shot. As usual Sigler weaves a thick web and keeps you holding on to every word.

Lots of effort made to keep the character voices interesting. His style of narration is a bit different than the typical audio book ... but I like it. We notice Perry has a lighter voice in this one ... hmmm I wonder why? (wink wink).

Seems like there could just be a 3rd part to the story ... I am sooo waiting for it.

A Great Set of Books

Both Infected and Contagious were great books (make sure you get Infected first.) While many complain about the author reading his own work, one needs to understand Sigler offers all his novels as free podcasts on his website. Sure, at first I wasn't thrilled with his reading style, but it grew on me as the story progressed.

The storyline is solid, and I had a hard time stopping it when my commute ended. If you're concerned about the author's reading technique then get the print edition, but don't miss this pair of books, because they're great!

Sigler has added another fan to his cult-following.

This book is the equivalent of an exciting roller coaster ride. With each chapter, Sigler leaves you at the top of a huge drop, leaving you breathless with the anticipation of what comes next. I thoroughly enjoyed Infected and Contagious does not disappoint. Sigler does a better job of both character development and narration with Contagious than he did with Infected. Make sure you listen to Infected first (another great listen), then hop on this thrill ride!

May be best of the three

Read Pandemic and knew I liked the authors style. Picked up infected to start the trilogy from the beginning and it was worth it. Contagious was a ride from beginning to end...too bad it had to end. Scott Sigler has a great writing style...maybe because I'm from the Midwest and can relate to his wordplay. Truly recommend this book and all in the series. The authors other books and series are also fun rides!

Awsome...has made me a fan!

OMG! A GREAT "what if" ride! I don't care how "bad" folks thought the author read this book. (I don't like the way Stephen King reads his books either but it doesn't stop me from listening) I enjoyed this book soooo much! I drive for a living and I listen to LOTS of books and there are some I have by very popular writers that I have had to turn off because they were putting me to sleep...not this one though...I had to force myself to stop. Am posting same review on his other book cuz I feel the same...hope he writes lots more...

Edge of your seat thriller

This may just be Scott Sigler's best book yet. As always, Sigler's reading is inspired -- he puts so much energy and effort into the reading that you can't help but get caught up in the story. The characters for this book are engaging, and the plot is tight. While the book preceding this, Infected, wasn't my favorite book ever, Contagious takes the story to a whole new level. If you like sci fi, action, or horror -- this book is for you. I stayed up long past my bedtime listening to the very end of this novel, and it was well worth it.

I loved this book. I didn't mind the author reading his material. This one takes you on quite a ride. I would recommend this one. On a side note if you like his work Earthcore, Nocturnal (if you can get past some of the character voices), and Ancestor are must listens.

So much better than the first book "Infected"!

This is truly a book where the sequel is so much better than the original. I liked “Infected” but it didn’t have a true story to me. This book is a great story and I really enjoyed it!

always am concerned about long books. though they are perfect for long drives, they tend to be uneccessarily wordy, and at times deeply boring. this book was non of that. from start to conclusion, it had my attention.