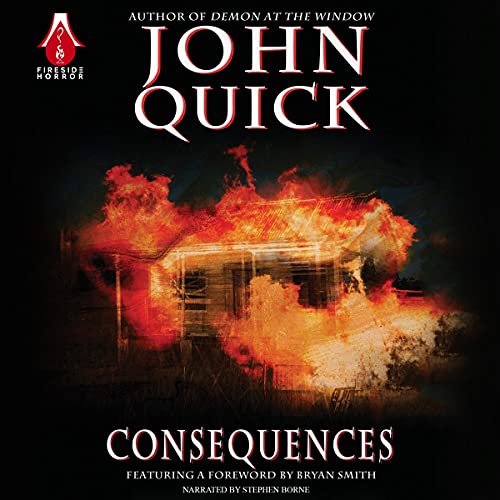 By: John Quick
Narrated by: Stephen Borne
Try for £0.00

Thirty years ago, Crazy Freddy hung his family up with barbed wire and skinned them alive. Now his ghost haunts the deserted cabin where he used to live. At least, that's how the story goes.

For seven friends freshly graduated from high school, that cabin is the site of their farewell party, their last blow-out before heading their separate ways to start their new lives after high school. Unfortunately for them, there is something out there in the dark - something that watches them as a tragic accident unfolds. Something that wants revenge for what they've inadvertently done. Something that will make them acknowledge what they've done and face the consequences.

The debut novel from the author of What Sleeps Beneath, and the spiritual predecessor to Demon at the Window, here is an homage to the slasher films of the '80s and the horror fiction boom of the 2000s.

What listeners say about Consequences