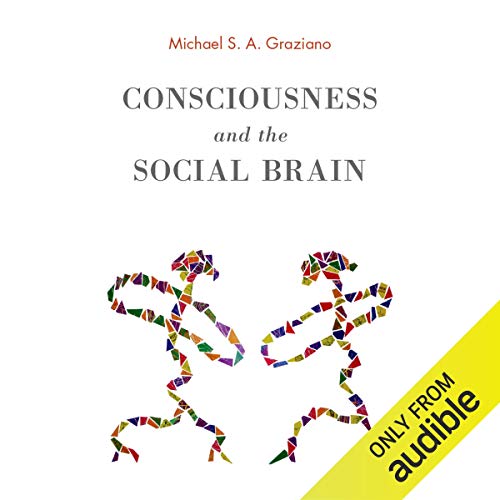 Consciousness and the Social Brain

By: Michael S. A. Graziano
Narrated by: Sean Runnette
Try for £0.00

What is consciousness and how can a brain, a mere collection of neurons, create it? In Consciousness and the Social Brain, Princeton neuroscientist Michael Graziano lays out an audacious new theory to account for the deepest mystery of them all. The human brain has evolved a complex circuitry that allows it to be socially intelligent. This social machinery has only just begun to be studied in detail. One function of this circuitry is to attribute awareness to others: to compute that person Y is aware of thing X.

In Graziano's theory, the machinery that attributes awareness to others also attributes it to oneself. Damage that machinery and you disrupt your own awareness. Graziano discusses the science, the evidence, the philosophy, and the surprising implications of this new theory.

What listeners say about Consciousness and the Social Brain

I have encountered Graziano's "Attention Schema" theory of consciousness before in other books, but this volume explains it thoroughly and decisively. While it comes somewhat short of the Holy Grail of the FINAL EXPLANATION of what makes us conscious--one questions if such a thing is ever at last possible, any more than the fish explaining how its bowl was made, ultimately unable to escape its confines--Attention Theory is about the best psychological and neurological theory that we have at present. It is a definite step forward over all former theories. A book well worth reading.

What was one of the most memorable moments of Consciousness and the Social Brain?

The last chapters discussing the nature of spirituality and possibility of machine consciousness were intriguing and refreshingly different from most other accounts.

The narrator spoke with very little voice inflection and what was there was annoying. Every sentence ended with a lowered pitch making it sound like each one was the last one in the paragraph or chapter. It became more and more distracting until it was only possible to listen in small doses. However, the content was compelling enough to finish.

The author has an unusual hypothesis about the relationship of awareness and attention, and even though his exposition was repetitive, the concept is exciting and compelling.

This book did not seem like a book that should be listened to. There were times I had to rewind to listen what the narrator said. Even still it was hard to keep pace with. A written form would have sufficed much better. Because this book is a scientific book there were times when the explanation was too drab.

I would recommend this book to avid neuroscience readers and people who work in the set field.

Not a book for the average audible listener.

If you could sum up Consciousness and the Social Brain in three words, what would they be?

How he weaves personal anecdotes with complex scientific theories and facts to make the book much more readable.

Would you listen to another book narrated by Sean Runnette?

Did not care for his inflection. I think just personal preference.

the chapter on spirituality.

I have listened to this book three times now. This is brilliant stuff, and has made me rethink some of my long held beliefs.

What would have made Consciousness and the Social Brain better?

If one wished to learn and appreciate Dr. Graziano's thesis, He needed to shorten the book by two-thirds, as he did in his previous Neuroscience paper.

Were the concepts of this book easy to follow, or were they too technical?

1.The scientific embellishments were not too technical for those with a working English vocabulary. 2. They were easy to follow, but led nowhere. Fundamentally Dr. Graziano believes he has solved the problem of consciousness by renaming it. Doesn't work for me. 3. To hypothesize that we are conscious because we internalize the manifestations of consciousness we observe in someone else is beyond silly. A newborn human is conscious (and intelligent) enough to find its mother's breast, and clever enough to observe her thrusting out her tongue and imitating that action. To maintain that those actions are performed in some sort of preconscious state requires that the author define such a state and who or what serves as its model. 4. Elephant babies dropped by their mother emerge fully able to walk. Chicks and ducks emerging from eggs in a featureless box walk around looking for food. Dr. Graziano might not characterize their state as conscious, but most would.

The droning narrator was irritatingly smug.

If you could play editor, what scene or scenes would you have cut from Consciousness and the Social Brain?

First, I would ask the author to cut the length by two thirds, and leave it up to him which parts should be removed. If the core thesis remains unchanged, I would not recommend it for publication.

There are better, more cogent and interesting treatments of this topic in other books.

Thoroughly explained within a strictly scientific view as well as personal viewpoints on what consciousness is and what it isn't. Enlightening to say the least.

I liked this book because you don't have to be a scientist to understand it. I could follow it all the way through!

A piece of a larger puzzle

The book purposes a theory that when combined with others, may provide a useful lens which explains consciousness. Worth it.

The content and theory are fascinating. Sometimes a bit wordy, redundant and lengthy, but he also has more succinct academic articles.
What makes this audiobook almost impossible to follow is the narrator. Makes it very monotone but in a dramatic way for each sentence. The quick wordflow combined with long pauses also make it impossible to increase the speed, since then the words become impossible to understand and pauses to empty. Just not the right way to narrate an audiobook.

Well,this book has taught a lot to me and I feel now it is my obligation to admire the content and so the book. I feel lucky that I stumbled onto this book....