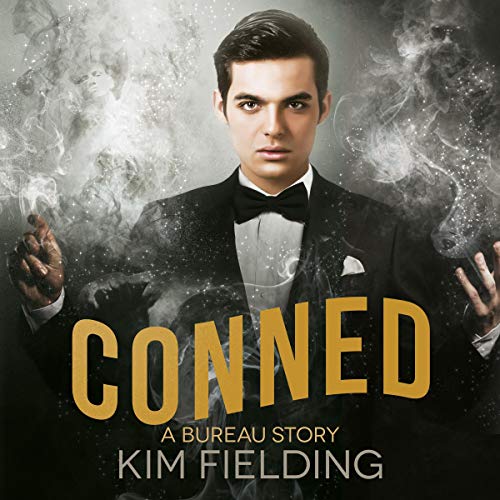 By: Kim Fielding
Narrated by: Joel Leslie
Try for £0.00

World War I veteran Thomas Donne is new to San Francisco. Always a stoic man, shell shock and a lost love have nearly turned his heart to stone. No matter - a private eye has no room for softness. Almost broke, he takes on what appears to be a simple case: finding a missing young man.

As a magician and medium, Abraham Ferencz cons his audiences into believing he can cheat death and commune with their dearly departed. Although his séances are staged, the spirits are very real, and they’ve brought him almost more pain than he can bear.

When Donne’s case becomes complicated and the bodies start to pile up, he and Ferencz must fight their way through a web of trickery and lies. The truth is obscured by the San Francisco fog, and in their uncanny world, anyone can catch a bullet.

What listeners say about Conned: A Bureau Story

"I distrust you less than most" - Tom to Abe

I'm a big fan of The Bureau books, this one is a bit of a prequel to the series and as an aside, gives a glimpse into who Herbert Townsend (head of the Bureau of Trans-Species Affairs) is, but it doesn't need to be listened to first.

In typical Bureau fashion, this book asks "who is the monster" - the non-humans or the humans who are capable of appalling things. I found myself completely invested as two flawed men dealing with ghosts of their past (both metaphorical and physical) team up to solve the case of a missing young man, restoring missing pieces of themselves along the way.


Joel Leslie does a stellar performance capturing the "feel" of San Francisco in 1928, the war weary detective that is Tom and the confident (but still damaged) showman, Abe. His ability to capture each character's personality, bring forward their emotions and build the suspense of the story in his performance brings Kim Fielding's world vividly to life and I look forward to more from this Author/Narrator duo.

Nothing in this plot is predictable. I love when I can't guess what it's coming next! Do you want to hear a very exciting history? Well, you are in the correct place!!!