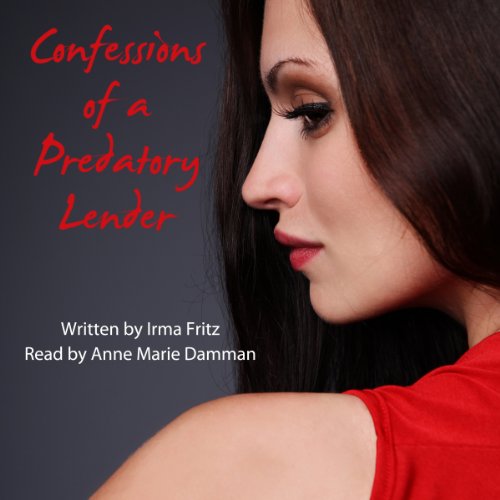 Confessions of a Predatory Lender

Meet Christy. She's all about Palouse. She was born in the town of Palouse, in the Palouse region of Washington State. Her family name is Palus, and her father is a descendant of the Palouse tribe - watered down to a few drops. Still, it's something she is proud of. If someone had told her that she will become a predatory lender, betray her best friend, fall in love with a thief, and help her bosses bust up the bank she works for, she would have laughed out loud.

This is the summer of 2006, and everyone knows you can make a killing in mortgage lending. Christy and her BFF Megan moved to the big city of Seattle to do just that. While Megan is already dreaming of hot cars and designer clothes, "good girl" Christy's ambitions are more modest...at first!

So how is it her fault that she lands in the world of subprime lending; you know, the stuff that lost families their homes and wrecked our economy?

What listeners say about Confessions of a Predatory Lender

What made the experience of listening to Confessions of a Predatory Lender the most enjoyable?

Irma Fritz's skills as a writer. She seems to pull characters out of her frontal lobe at will. A fine story well told. Anne Marie Damman's fine diction and subtle voice characterizations are the best icing on this story cake. Her pacing is perfect. She is a 5+ in my book, or should I say in my audio file? Loading the book on my smart phone made accessing it easy. My phone is always with me.

Back to the author: Irma Fritz writes in this genre so well. While listening to the story, I kept thinking, "The details are described so well. I can see everything."

The money aspects of the story I found interesting. The drill instructor-like teacher who weeds out 30% of the class in short order. Believable. The various characters and situations. Believable. All described so well as to put me there. And there is some real insight into basic human nature that the author captures well, and it rings true.

The author's descriptions are so vivid, it's like I'm at the main character's (Christy) favorite meeting place, La Belle's (if that's the spelling) sitting at the table with Christy, and her group of coworkers. One of the characters, Megan, says "frickin" so much I found myself yelling, "Shut the f*ck up!" at my smart phone. The character came off so real, she pulled that emotion out of me.

Ms. Fritz is an accomplished writer and draws characters out, consistently teasing a little more from their core as the story progresses. She presents the characters so well, I'm glad they aren't obnoxious (okay, Megan with her frickin' is an exception).

The author creates "for me" characters I like to hate or characters I'm not used to being with in a world I'm not familiar with.

I picked up on some smart advice about money and lending or borrowing it, and how much humanity is in the transactions. I won't give anything away, though. Readers who like this kind of story probably will be rewarded with insight into the cause of the biggest recession since the Great Depression.

I recommend this audio book. Ms. Fritz should get wealthy and a film deal out of this. The book is well written and I think you'll love it. It's a good bang for the buck, if you'll excuse the cliché metaphor. I'll be surprised if Irma Fritz isn't offered a film deal on this work.

What about Anne Marie Damman’s performance did you like?

She was able to give each character a nuanced life of its own. Without trying to do an impression to create the character. Just a slight change in tempo, pitch, volume (up or down) is all Ms. Dammon needed to separate the characters.

The higher you climb the harder you fall.

Confessions of the predatory lender

If you could sum up Confessions of a Predatory Lender in three words, what would they be?

What does Anne Marie Damman bring to the story that you wouldn’t experience if you just read the book?

A real life experience, as if the main character told me her life story.

If you could rename Confessions of a Predatory Lender, what would you call it?

Rupture of the Real Estate Bubble

I really enjoyed the narration by Ann Damman for the Confessions of a Predatory Lender. It was excellent quality. The story written by Irma Fritz is very interesting and after listening to this audio version, I have to get the book to read it too.