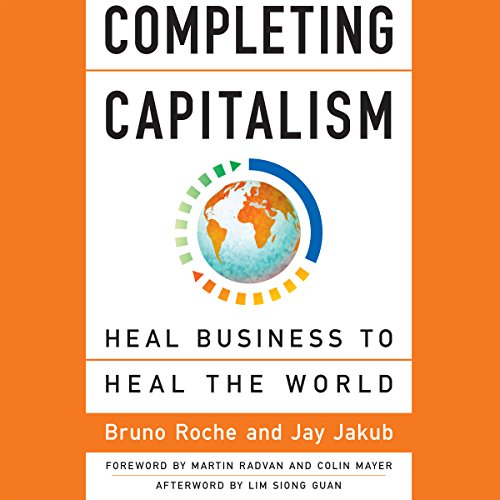 By: Bruno Roche,Jay Jakub
Narrated by: Tom Kruse
Try for £0.00

For the past 50 years, the business world has been dominated by the Milton Friedman financial capitalism economic model, which preaches that it is the "sole social responsibility of business to maximize profit for distribution to shareholders". This one-dimensional focus represents a grossly incomplete view of reality - there are many other factors businesses need to pay attention to if they are to thrive and endure - and has resulted in increasing global economic dysfunction, widening inequality, and environmental destruction.

In this book, Roche and Jakub offer a new model that is built around detailed metrics to measure and track performance in all forms of capital, including social, human, and natural as well as financial. And this is not simply theory: The model has been extensively field-tested in live business pilots in Africa, Asia, and elsewhere. It is delivering superior measurable performance across the different forms of capital, including generating more profit than a profit maximization approach. Recent high-profile books like Capital in the Twenty-First Century have exposed the shortcomings of today's financial capitalism model, but this book goes far beyond by describing a well-developed, proven alternative.

What listeners say about Completing Capitalism

The way this guy reads is so unnatural I have had to listen to the first chapter 3 times because I cannot keep focused on his Shatner-esque style.