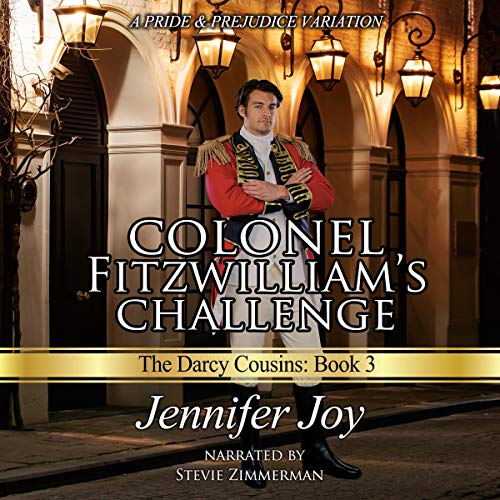 By: Jennifer Joy
Narrated by: Stevie Zimmerman
Try for £0.00

He was given a special assignment. He didn't count on falling for her.

Colonel Richard Fitzwilliam, a hopeful romantic, cannot afford to marry for love. When he is offered a new assignment with the promise of a promotion, he eagerly accepts - only to find himself immersed in a world of intrigue and lies.

Adélaïde Mauvier is a successful dressmaker on the verge of attaining everything she thought she wanted. When she is thrown into Colonel Fitzwilliam’s company, she begins to think there might be more to life than her ambitions.

Colonel Fitzwilliam's Challenge is the third book in The Cousins Series trilogy. If you like falling in love with your favorite heroes and heroines as they fall for each other, then you'll love this sweet romance based on Jane Austen's timeless classic, Pride and Prejudice.

Listen to Colonel Fitzwilliam's Challenge to satisfy your craving for a clean, sweet Regency romance with a pause-resisting mystery today!

For the 1st time, despite the talents of Stevie Zimmerman, I just couldn’t finish this story. Didn’t keep my interand I love the Colonel. Oh well…..

Colonel Fitzwilliam is a favorite, I devoured this

I devoured this greedily, the story is well written and the plot a good one. Stevie is a joy to listen to, I so enjoyed her changes in accent for each character. This was fun😄

I enjoyed this third book in the series which followed Colonel Fitzwi!Liam after Anne Dr Bourgh's marriage. He is one of my favorite P&P characters and I like reading stories with him as the main hero, especially if it ends in HEA. The plot was engaging and kept me guessing until the end. Adelaide and her girls were pictured very well and their struggles made me feel for them. Co!onel Fitzwillam was the honorable and loyal gentleman we all love. It was a very satisfying story.

If Jane Austen was alive ,she would _could have wri-
ten this !This was the best of the cousin series!Th