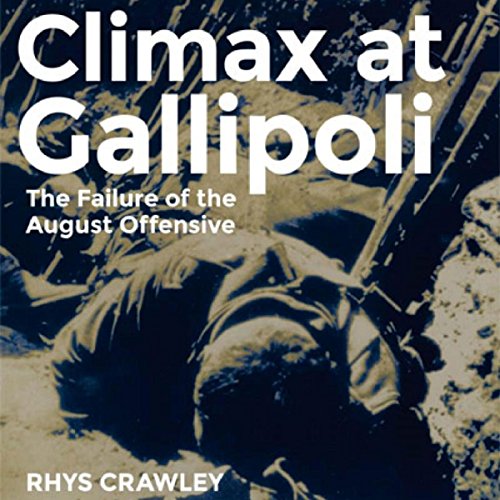 By: Rhys Crawley
Narrated by: Fred Humberstone
Try for £0.00

Gallipoli: the mere name summons the story of this well-known campaign of the First World War. And the story of Gallipoli, where in August 1915 the Allied forces made their last valiant effort against the Turks, is one of infamous might-have-beens. If only the Allies had held out a little longer, pushed a little harder, had better luck, Gallipoli might have been the decisive triumph that knocked the Ottoman Empire out of the First World War. But the story is just that, author Rhys Crawley tells us: a story. Not only was the outcome at Gallipoli not close, but the operation was flawed from the start, and an inevitable failure.

A painstaking effort to set the historical record straight, Climax at Gallipoli examines the performance of the Allies' Mediterranean Expeditionary Force from the beginning of the Gallipoli campaign to the bitter end. Crawley reminds us that in 1915, the second year of the war, the Allies were still trying to adapt to a new form of warfare, with static defense replacing the maneuver and offensive strategies of earlier British doctrine. In the attempt both the MEF at Gallipoli and the British Expeditionary Force on the Western Front aimed for too much - and both failed. To explain why, Crawley focuses on the operational level of war in the campaign, scrutinizing planning, command, mobility, fire support, interservice cooperation, and logistics.

The result is a view of the Gallipoli campaign unique in its detail and scope as well as in its conclusions - a book that looks past myth and distortion to the facts and the truth of what happened at this critical juncture in 20th century history.

"This book is highly recommended for all those interested in the Gallipoli campaign and in the operations of the First World War as a whole." (Robert O'Neill, author of The German Army and the Nazi Party, 1933-1939)

What listeners say about Climax at Gallipoli

I love my military history books, but the narrator of this made me cringe a bit. Couldn't finish it, let alone listen to it again.