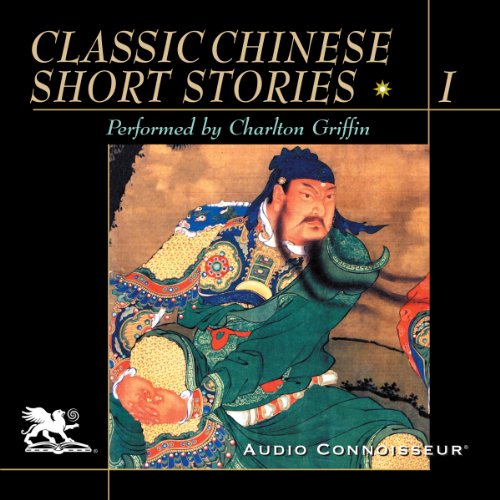 China has been a wellspring of storytelling for over 2,000 years. Sadly, this fantastic literature is little known in the west outside the halls of academia, though a handful of recent 20th century authors have attained a respectable following. The stories in this volume date from the sixth century A.D. to the early part of the 20th century, and will give the listener a good feel for the subject. Astonishingly, the Chinese enjoyed from the earliest times many of the genres we take for granted today, from romance and love to adventure and satire.

There are seven stories in Volume 1.

In "The White Monkey," by Anonymous, a general's honor and self respect are on the line when his wife is kidnapped.
"The Jade Goddess," retold by Lin Yu Tang, is like a fine piece of exquisite porcelain. This wonderful story from the 6th century is a thing of delicate beauty. Will an artist put aside his creative gifts for the sake of love?
"The Canary Murders," by Feng Meng-lung, is a twelfth century forerunner ofthe detective story which attempts to sort out a string of mysterious deaths.
"The Book Worm," by P'u Sung-ling is a humorous satire about a bibliophile who suddenly finds love.
In "K'ung I-Chi," by Lu Hsun, an old-fashioned scholar loses his way in life.
In "Mr. Pan In Distress," by Yeh Shao-Chun, war threatens the settled life of a provincial educator.
"Intoxicating Spring Nights," by Yu Ta-fu, is a look at the effects of a newly industrialized society.

"The stories are lovely....Griffin reads in a deep, rich voice that is easy to listen to." ( Philadelphia Inquirer)

I have an enormous collection of short stories, but most are European. What I know about Chinese literature would fit in a thimble, so I certainly can't comment intelligently about these stories, nor the pronunciation of Chinese, etc.

But as a lover of perfectly crafted short stories, I enjoyed each one. For me these were exotic, unusual, and fascinating glimpses of another culture. ("The Jade Goddess" was my favorite). Additionally, Charlton Griffin is simply wonderful here, and I enjoyed the sound effects.

This selection of classical Chinese short stories introduces English-speaking listeners to the best of traditional tales of China. They are read with outstanding characterisation, intonation and passion, transporting listeners to a foreign place and time. The strangeness, mystery and colour of China blends with attributes common to all humankind to build bridges between Western tales of antiquity and the Orient.

Excellent Study of Culture and Life

Excellent presentation. Very sad tales of life in China over the centuries.

The stories are interesting and often thought-provoking. The narrator does an excellent job. Would recommend to those who enjoy short stories.

I would recommend this to anyone. These Chinese stories are very enjoyable.

What was one of the most memorable moments of Classic Chinese Short Stories, Volume 1?

I forget names but the jade statue and its story is maybe the best but all are good.

What does Charlton Griffin bring to the story that you wouldn’t experience if you just read the book?

His narration is very good and with the music it became very mysterious and thrilling as well.

If you could take any character from Classic Chinese Short Stories, Volume 1 out to dinner, who would it be and why?

I would take Mr.Penn out and ask him to finish the story. I felt his story not finished.

A Change of Pace

A good mix of stories, but with heavy sound effects mixed in with the narrations, sometimes bad sound quality, and it is quite brief. Mostly this is fun if you are studying short stories and want to see how the Chinese variety vary from more familiar British ones. The first story was my favorite I suppose, and there is one about a canary that is told in a repetitive predictable and dull fashion. Its a pretty lean production in that you get few stories for your buck, and on the whole, I'd advise actually to just go to a library and find a volume of Chinese stories to peruse if you are curious. Not a bad buy necessarily.

every story is incredibly depressing with little else to offer besides melancholic drama. there is some period immersion, but mostly the author is seemed to be engaged in self-indulging depression.

Like the other reviewer said, and was unjustly criticized for, these short stories lack proper endings!

The first three stories were very good and, for me, complete. The balance of the short stories left much to be desired as the endings were not what I considered adequate. The reader is excellent and I did get much enjoyment out of the first group.