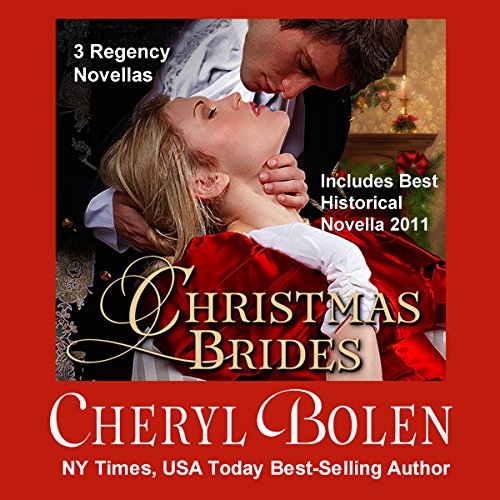 By: Cheryl Bolen
Narrated by: Rosalind Ashford
Try for £0.00

The Christmas Wish: To grant her dying father his last Christmas wish, Miss Annabelle Pemberton proposes marriage to her father's former ward, the rakish viscount Lord William de Vere. How painful it will be, though, to be trapped in a marriage of convenience with the only man she has ever loved. Marriage to the wealthy heiress will help restore de Vere's decaying estates, but that is not why he accepts her bizarre proposal. He has grown to love her father as if he were his own, and if Mr. Pemberton selected him for his only child's husband, then Lord de Vere must honor the man's final wishes. Little does he suspect his father-in-law knows him better than he knows himself.

Home for Christmas: For six long years, Captain David St. Vincent has dreamed of returning home to Ramseyfield - and to its prettiest resident, Elizabeth Balfour. To his astonishment, though, it is not Elizabeth, but her plain younger sister, Catherine, whose company he seeks. Cathy Balfour has worshipped David for as long as she can remember. It was she who wept when he left, she who presented him with a cross to keep him safe while in service to the crown, and she who read and carefully collected the newspaper accounts of his sea battles. But how can one as plain as she ever hope to win his heart?

Christmas at Farley Manor: It wasn't to be a real marriage.... Harry Tate is an army captain of some means who is almost certain to die when he returns to Spain on the morrow. Elizabeth Hensley is a destitute beauty he's only too happy to help. Two years later.... When they meet again at his ancestral home, Harry is now Viscount Broxbourne, bent on showing his wife how much he wants her to be his real viscountess by Christmas.

What listeners say about Christmas Brides

Terribly predictable stories with an absolutely horrendous narration. Will never purchase these authors/narrators' work again, EVER!

Great Book!
This is a great book; this is a collection of three regency novellas written by Cheryl Bolen and narrated by Rosalind Ashford. The first novella is The Christmas Wish, Annabelle Pemberton proposes marriage to her father’s former ward the rakish viscount Lord William de Vere to grant her dying father’s last wish. The second novella is Home for Christmas, Captain David St. Vincent has dreamed of returning home to Ramseyfield and to Elizabeth Balfour, to his surprise he realizes that he is more attracted and seeks the company of Elizabeth’s sister Cathy. The third novella Christmas at Farley Manor, Harry Tate and Elizabeth Hensley married to save him. When he returns two years later he sets out to prove to Elizabeth how much he wants her as a real wife.

If you are looking for a great romance collection with great characters then you need to listen to this book. I am looking forward to listening to the next book by this author and narrator.

Three enjoyable stories all with a tie to Christmas told in a compelling way by the narrator. The many different characters in each independent storyline were nicely fleshed out by the author who sensibly left the stories as novellas rather than try to stretch them out into full length novels. Add a terrific narrator who brought those numerous different characters to life giving each one a distinct personality and voice, and you have a terrific trio of romantic Regency tales.

The books were good regency Christmas books but the narration sounded like Siri with a British Accent. I think something must have been done in post production to destroy the voice. It was grating.

Cute stories but the narrator,... ugh

I like the stories. They were very cute and it's nice to get the novellas. The narrator, however, ruined the entire book. She reads like a newscaster trying figure out how to read a story. Her inflections are all wrong. Her emotions are wrong. She has no clue how to portray the bits of humor scattered throughout.

Other than them being male and female, it is virtually impossible to distinguish between her main characters. When reading a romance story, the lead male needs to have a sexy, vibrant voice. Not the voice of a pompous old man. And the only time to have a female lead sound like an airhead is when she is written that way. I kept visualizing pompous 70 year old men trying to decide which teenaged airhead they were actually in love with throughout these stories. It was ridiculous.

There are many readers far better at this than this narrator is. She has gone on my list of narrators to avoid.

I kept imagining how much better this would have been if someone like Mary Jane Wells had read it.

This is a book I am going to buy for my kindle, rather than listen to on audible.

Very pleasant and fun, especially the third one, which won a prize in 2011. Highly recommend. Looking for more by Cheryl Boleyn after enjoying this.

Good book enjoyed it I don't like to have to fill this out. Also tells you how many words

Actually, I really enjoyed each of the three stories in this collection. Christmas at Farley manor was my favorite I think. All three stories had delightfully developed characters and were filled with sweet romance. This was my first experience in listening to the narrator, Rosalind Ashford. She has a lovely voice and pleasant pronunciation of the language of the time. The only think I had difficulty getting use to was the cadence of her inflection. I know you is extremely talented, but it just felt rather monotone in my opinion. I will say that by the 3rd story, it didn't bother me as much as the first two, perhaps it is just a matter of what you are use to. I'd still tell my friends to definitely read the books, and listen to the sample audio version. As I said, she has a lovely voice and obvious talent in her enunciation of languages. I personally just had to get use to her cadence. Others may not find that to be the case. These novellas are well worth checking out. 😀

Would you try another book from Cheryl Bolen and/or Rosalind Ashford?

I would definitely try another book from the author but not the narrator.

Without a doubt the worst narrator I have ever encountered on a recorded book. The reading had a very odd cadence which ruined it for me.

The narrator's voice was a little hard to understand. She also didn't vary her voice much between characters, so I would encourage less reading and more performing.

Would you be willing to try another book from Cheryl Bolen? Why or why not?

Yes. I really love regency romances and especially Christmas ones.

I wanted to listen to a regency so I bore with the narrator and her voice. The accent made it kind of hard to understand sometimes.

A wonderful selection of Novellas

I love Christmas, I love a wedding, and I love all three of these Christmas Brides stories. Cheryl Bolen has a real understanding of all things Regency, if I didn't know better I'd say she's an immortal or a time traveller who has lived through the ages herself! It just goes to show just how much research she must put into that era. The plots of the books and their characters are captivating and add to that the descriptive text about the places and the clothes, and the way of life, then you have the perfect romance novel.

I am sorry to say that I wasn't as enthused with the narrator of these stories. I will admit that she is very articulate and clear with her words but what she gains from that she ends up losing because the pace of her reading is too slow for my liking. I think that at her pace it would have taken me twice as long to listen to the stories. I remedied that by changing the speed on Audible which helped a lot.