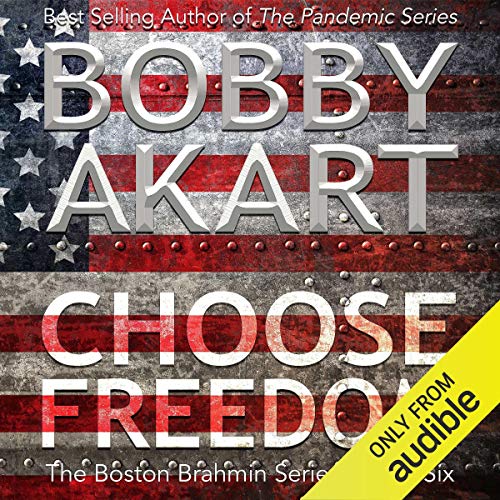 When faced with the tough choices necessary to preserve our nation's ideals, I say we choose freedom!

With those words, the new American patriots, The Loyal Nine, operating under the specter of their forefathers, undertook the impossible - defeating the tyranny which infected their own government.

But first, The Loyal Nine must resolve conflicts between themselves. An old friend arrives and takes up the fight as the insurgency movement of The Mechanics continues. The president is firmly entrenched in a "third term", and he uses his new allies, a globalist-sponsored Army in the form of the UN Peacekeeping forces to quash dissent.

For freedom-loving patriots, a martyr is remembered, a leader is born, and Americans come together under the battle cry -

Would make a great TV series, very entertaining and exciting. Left us wanting book 7 in the series... thank you

would recommend this book to anyone! hope to read more of his work good luck !!

Another great listen, but seemed a little rushed

Another great listen! My only complaint is that this book seems to tie up some story lines that could have morphed into their own book in the series. Being that I love this series so much, it was a touch disappointing that these stories got wrapped up in a quick explanation, instead of in their own story. But all in all a great listen and a great series!

Excellent ending to a tremendous series!

Where does Choose Freedom rank among all the audiobooks you’ve listened to so far?

Choose Freedom is one of the best books I've listened to and I've probably listened to 30 or so survival type books, most of the 3+ book series. This is right up there at the top. Great finish to a series, just sad that it's over!

What was one of the most memorable moments of Choose Freedom?

Finding out that Drew hadn't been killed without at doubt!!

Which character – as performed by Joseph Morton – was your favorite?

Steven & Sarge were pretty close. It's hard to argue against Sarge given he's the most central character and he's in one extra book. But I thought the character of Steven being the military bad-ass with a sense of humor and his obvious love for his brother was great, so I'd probably have to give him the nod.

Again, finding out that Drew hadn't been killed....I admit, I teared up! lol

This was just a fantastic series. The character development was sensational and by the time you get to Choose Freedom, you feel like you know these characters like those in your favorite TV show. The story line and development was spectacular and the use of current events along with so much history was very educational and made you feel like this could actually be happening right now!

I just finished the Boston Brahmin series and thoroughly enjoyed the story all the way through. Growing up just minutes from where General George and his troops marched, I have a true love for history. Historical fiction is what I’m drawn to as well as end times storylines so this series was made for me. I can clearly see why my husband recommended it as my first Bobby Akart series. Sorry to say goodbye to The loyal nine.

This book was more then just a good read. it was filled with tons of factual and historical information of the type that the average person may never have heard, and certainly was never taught in school. The author's perspective on what might happen and how the American people might respond was a little scary and a little heart-wrenching. Who knows how we will all react to a Nationwide crisis? Even though it's fiction it's given me a lot to think about. So thank you Bobby, for creating this great series!

Fantastic on its own or as a series conclusion

This is a terrific wrap to my favorite series (this far) by Bobby Akart.

Certainly this could be read and very much enjoyed as a stand alone book. If you haven’t read the others, don’t let that stop you from giving this one a listen. Either way it is 5 stars all the way.

This book has everything: a ton of action, drama, romance and historical fiction. While Bobby Akart tied up the loose ends, he continues to inspire thought about our nation, the Constitution and freedom. There are emotional highs and lows that combined with the plot kept me glued to my iPad. This is an excellently written series, with characters whom you feel like you know, which also teaches about the history of the United States. It is a must read for everyone, especially in light of our current political climate.

Joseph Morton once again gives a great performance. His narration skills are fantastic. He drew me right into the story and kept me entertained and focused on the story instead of trivial things.

This series is somewhat timely and seems oddly relevant to the current political climate. With the way this book ends I am anxious to see if there will be a book 7, 8, and more. Thank you to the author for such a compelling story and to the narrator for conveying the story in a great way!