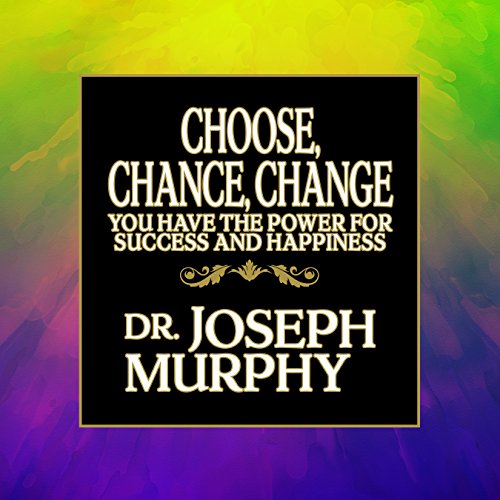 Did you ever wonder why one person is rich and another is poor, one is happy and another is sad? Dr. Joseph Murphy offers guidelines to put you on the right path. As the founder of the Church of Divine Science, Dr. Murphy produced books, tapes, and radio broadcasts on spiritual matters, the historical values of life, the art of wholesome living, and the teachings of great philosophers from both the Eastern and the Western cultures.

An Adaptation of Dr Murphy's work

Where does Choose, Chance, Change rank among all the audiobooks you’ve listened to so far?

Which character – as performed by Tim Andres Pabon – was your favourite?

Having read many of Dr Murphy's books and listened to his original recordings, I was curious to hear this audio book. Although the narrator, Tim Andres Pabon, has a true, deep grasp of the subject matter, this audio book is not a direct reading of a particular book by Dr Joseph Murphy. It is more of an amalgamation and adaptation of many of Dr Murphy's specific examples, as given by him in his own works. I recognised all the examples from his work, albeit with so-called updated 21st Century references. This is not necessarily a criticism, but it took me a while to adjust to this, as I kept hearing references to modern day things, such as computer 'hard drives' and even 'Facebook', which was kind of weird, given that Dr Murphy passed on in 1981! Also, some of the specific language used by Dr Murphy in his books and audio presentations has been paraphrased and adapted, so for example where Dr Murphy in his books and recordings would talk about someone wishing to be happily married, this audio recording changes the wording to someone wishing to have the ideal 'boyfriend' or 'girlfriend'.

There are a few references to ancient spiritual teachers and teachings, but nowhere near as many as Dr Murphy includes in his books and original audio recordings.

The cover and title of this audio book is not entirely accurate, as it states simply that it is by Dr Joseph Murphy and is narrated by Tim Andres Pabon, as if it were in fact a book written by Dr Murphy, whereas in fact it is a misleading title. It should really say, 'based on the writings of Dr Murphy', which is more accurate. I also sense that this audio book is aimed at college-age and twenty-somethings, as it often refers to 'classmates' and not colleagues. Again, this is a little off putting, as Dr Murphy's actual writings are aimed at everyone, regardless of age, and this audio recording seems distinctly geared at a certain audience.

To sum up, if you're truly searching for Truth, then you will still have an unfulfilled need to really understand deeper truths, and for that you will need to read and listen to Dr Murphy's actual books and recordings and the timeless, spiritual books such as The Bible, I Ching etc. However, despite the misleading title, the essence of the spiritual understanding of how the conscious, subconscious and greater conscious mind works is very accurate, and it is clear that great attention to accuracy in that regard has been paid. I'm not sure I would have the same sense of weight in its authority if I hadn't read Dr Murphy's actual works first, but it is clear that this work has been put together with great understanding, albeit without much specific reference to the timeless, changeless source of all things.

I'm not quite sure what the title cover means, ‘Choose, Chance, Change’. I looked that up, and could find no reference to Dr Murphy’s actual works using those words. Not sure what the 'chance' bit means, and it is not explained. That aside, I would simply request: please correct the title cover to something more accurate, e.g. '...... based on Dr Murphy's writings' or something along those lines.