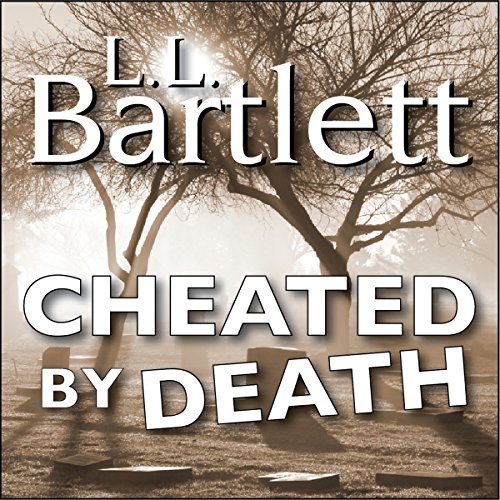 Jeff Resnick faces a new dilemma: someone is stalking his sister-in-law, Brenda, who fears that violence from pro-life supporters will escalate near the women’s clinic where she works. Or could the vandalism, threatening phone calls, and letters against her have come from her abusive ex-husband? Meanwhile, Jeff grapples with meeting his estranged father and the sister he never knew existed. Could Patty Resnick be the key to Brenda’s stalker? And what has that got to do with the death of his brother Richard’s colleague?

What listeners say about Cheated by Death

Made a long car ride much shorter.

What made the experience of listening to Cheated by Death the most enjoyable?

I really enjoyed the audio, it kept my attention and I got into the story .

What other book might you compare Cheated by Death to and why?

Would you listen to Cheated by Death again? Why?

Cheated by Death is an excellent addition to the series. The plot with all of the unexpected twists and turns, left me always wondering what was coming next. My favorite character was Jeff Resnick .I listened to this as an Audible book. There were times when the women sounded the same, But the writer wrote it in such a way it made it easy to tell who was who. That small detail did not hurt the plot or the development of the characters. Other than that detail the narrator did an excellent job.

I love the story line.

Jeff thought his long lost father was dead until the day he finds out he is alive but dying.

I love the series and Jeff is my favorite character.
Once again, Steven Barnett has done an outstanding job as the narrator.

Jeff Resnick thought his long lost father was dead until the day he finds out that he was wrong. He discovers that Chester Resnick is still alive but dying. He also finds out that he has more family than he realized.

As if that wasn't enough to keep him busy he has to find out who is stalking his sister-in-law, Brenda.

Steven Barnett once again turns a wonderful performance as narrator.

I love this series and Jeff is definitely one of my favorite characters.

Would you consider the audio edition of Cheated by Death to be better than the print version?

I do, because the audio version conveyed emotion better. Steven Barnett's voice was perfect for this book.

What was one of the most memorable moments of Cheated by Death?

When Jeff took pictures of the protesters at the clinic, almost every one of them had an ugly expression on their faces. This struck me as they had no idea of the surveillance and their true natures were obvious.

Which character – as performed by Steven Barnett – was your favorite?

Jeff Resnick was my favorite character. I felt that Steven Barnett, as Jeff, was sitting in the car with me, telling me Jeff's story. His voice was not overwhelming, which is a good thing in narration. It didn't distract from the story being told, it enhanced it. He had an honest and earnest delivery, just perfect for our main character, but the other characters each had their unique voices. Even the women's voices were done perfectly.

Jeff Resnick is without a family, except for his half-brother Richard and his wife Brenda, or so he thought... Richard tells him his father is still alive, but dying of cancer. Jeff has grown up thinking his father died, but is thunderstruck to find out in his first meeting with him that he had been there, like a ghost, at his high school graduation, and following his life in newspaper articles, when he was almost killed in a beating. Now he learns he has a half sister, who his father expects him to take care of after he dies.Brenda works at a Women's Clinic targeted by Pro Life activists and feels threatened every day at her job. Jeff cares more for who he feels is his "real" family, his brother and sister-in-law, and who can blame him. Richard raised him after his mother died. Jeff has erratic psychic abilities, but will they be there to help him when it counts?I listened to the audio book, which is narrated by Steven Barnett. I felt like Jeff was in the car with me, telling me his life story in soft tones. Even the female voices, which can be jarring in other narrators' treatment, were voiced with aplomb. I don't normally use audio books as I can't seem to follow the story, and vocal idiosyncrasies distract me, but I really enjoyed listening to this 3rd Jeff Resnick mystery. I hadn't read the previous editions but this book was just fine as a stand alone, with enough background to make me not feel the loss. I highly recommend the audio edition for the reasons stated.

What made the experience of listening to Cheated by Death the most enjoyable?

Jeff is always my favorite character. You just have to feel for him.

The scene where he saves Brenda from getting shot.

This book is a must listen to book. So many things happen in this book that you don't want to miss out on!

I truly enjoyed this. The person reading is captivating. Highly Recommend this series. Get this now series. It's great. Wow

What did you love best about Cheated by Death?

What was one of the most memorable moments of Cheated by Death?

My favorite scene is between Jeff and Richard when Richard asks, "Have you got feelings for my wife?"

What does Steven Barnett bring to the story that you wouldn’t experience if you just read the book?

He makes the story come alive.

Love this author and this series....

I first read this a year or so ago. Now revisited with audiobook. I have a memory problem due to a brain injury and this is the only upside. I can listen to books i read months or years ago and they are brand new again!!

ANOTHER GOOD BOOK. MOST ENJOYABLE!

Wonderful! Excellent writing and the performance was simply fantastic. Jeff is a good person trying his hardest to live his life. Richard is very supportive of him I like Brenda whose personality is beautiful. L l Bartlett is a brilliant writer. The emotions and different personalities of the different characters are very good. I feel for Jeff and I hope most fervently that he will soon have a better future ahead of him. I an continuing to the next book in the seri rides and hope that Ms Bartlett will continue with this series with more books ASAP.