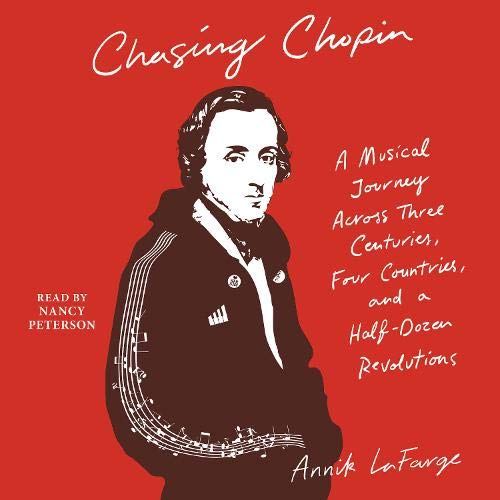 By: Annik LaFarge
Narrated by: Nancy Peterson
Try for £0.00

A modern take on a classical icon: this “luminous book” (Susan Orlean, New York Times best-selling author of The Library Book) tells the story of when, where, and how Chopin composed his most famous work, uncovering many surprises along the way and showing how his innovative music still animates and thrives in our culture centuries later.

In this widely praised book, Annik LaFarge presents a very different Frédéric Chopin from the melancholy, sickly, Romantic figure that has predominated for so long. The artist she discovered is, instead, a purely independent - and endlessly relevant - spirit: an innovator who created a new musical language; an autodidact who became a spiritually generous, trailblazing teacher; a stalwart patriot during a time of revolution, pandemic, and exile.

One of America’s foremost pianists, Jeremy Denk, wrote in The New York Times: “It is almost impossible for me to imagine a world in which [Chopin’s “Funeral March”] is both fresh and tragic, where its death is real. LaFarge’s charming and loving new book attempts to recover this world...This book took me into many unexpected corners...For a book about death, it’s bursting with life and lively research.”

In this “entertaining dual music history and memoir” (Publishers Weekly), a “seamless blend of the musical and literary verve” (Kirkus Reviews, starred review) LaFarge “brilliantly traces the footsteps of Chopin’s life” (Scott Yoo, host of PBS Now Hear This) during the three years, 183718-40, when he composed the now-iconic Funeral March, using its composition story to illuminate the key themes of Chopin’s life.

As part of her research into Chopin’s world, then and now, LaFarge visited piano makers, monuments, churches, and archives; she talked to scholars, jazz musicians, video game makers, music teachers, theater directors, and of course dozens of pianists. She has given us, says pianist, author, and New York Times columnist Michael Kimmelman, “a tour-de-force and journey of the soul".

It is an engrossing, “impeccably researched” (Library Journal) work of musical discovery and an artful portrayal of a man whose work and life continue to inspire artists and cultural innovators in astonishing ways.

An acclaimed companion website, WhyChopin, presents links to each piece of music mentioned in the book, organized by chapter, along with photos, resources, and more.

What listeners say about Chasing Chopin

A passionate insight into Chopin's short life. The accompanying website to listen to music by each chapture is needed and great.
I didn't like the style of the book, it's more of an account or her journey and her research and for me there was too much about George Sands.

I learned so much!

Chopin has been my favorite composer since I was a kid- this was an enjoyable listen (I tried reading it too, and had an easier time staying engaged with the audiobook).
There’s an accompanying website with links to YouTube videos of people playing the songs mentioned/explained/discussed in the book.
I thought it would be easier to have a playlist to go with the book...so I made one! You might need to have a Spotify account to access. The songs are listed in the order they appear in the book. Enjoy! https://open.spotify.com/playlist/63jdSJ6lgVlcwat6RIGciG?si=J2TlNNaWS1qu1hnsE-M1dg

This book prepares us to increase our appreciation of the beauty of Chopin's music. There is an accompanying Web site, which enables listening to specific compositions referred to by the author; additional examples are also included. Ms. LaFarge has painted a unique picture of Chopin's life by focusing on several key musical compositions, placing them in historical perspective and emphasizing why they are unique. I plan to add this book to my home collection, and recommend it to all who love classical music.

A very complete description of the mysterieus and intriguing personality of F. Chopin. Unfortunately cannot answer all the questions about him and or describe all his great compositions one by one, each and every single piece as I would love to dig in to.

I mis only one thing in this audiobook: since it is an audiobook I would really enjoy the flow of the music samples of the themes describe in here. So I didn't have to interrupt my listening to look after the themes and experience immediately what the author means in her description.
Maybe in the next edition?
Great job!