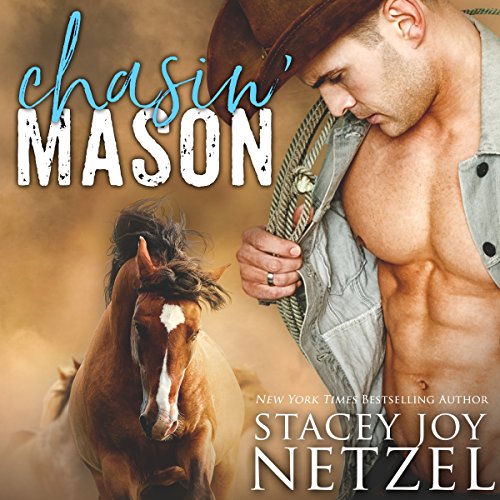 By: Stacey Joy Netzel
Narrated by: Andrea Buchanan
Try for £0.00

When his father announced his engagement to a gold-digger with a lying, scheming fourteen-year old daughter, seventeen-year old Tripp Warner left Warner Ridge Ranch and never looked back. Until the day he got the phone call that his father had died unexpectedly.

Reggie Reed lives with her guilt every day but can't quite work up the courage to track down the son of the man who raised her as his own. When Tripp shows up at his father's funeral eleven years later - and a hell of a man to be reckoned with - he has no interest in her too-late apology. Worse, they've inherited half shares of the family ranch - but only if they work together to catch Mason's Gold, the stallion a young Reggie let escape and made sure Tripp took the blame for.

Tripp proposes a secret competition to the beautiful witch who stole his life: Whoever catches the stallion first gets the ranch all to themselves. It sounds simple, but once they're out on the range, tempers and passions flare in the Texas heat and nothing goes as either of them expects.

What listeners say about Chasin' Mason

Would you listen to Chasin' Mason again? Why?

Probably! Fortunately, there are many books out there to read/listen to. But Chasin' Mason is worth listening to twice.

What other book might you compare Chasin' Mason to and why?

Not sure, I read a lot of books.

Which character – as performed by Andrea Buchanan – was your favorite?

She did an awesome job with all the characters.

When they set Mason Free!!!

I really enjoyed this book! From beginning to end it kept me reading.