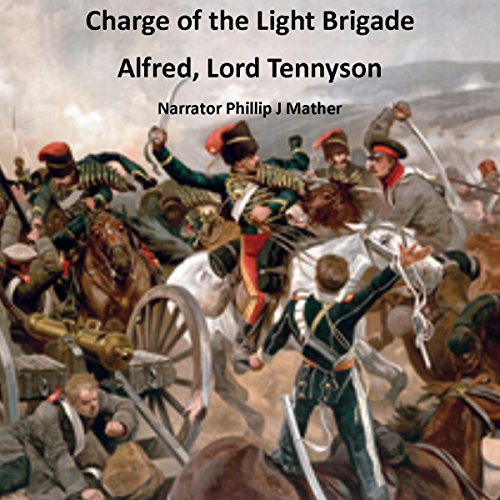 Charge of the Light Brigade

Charge of the Light Brigade

Phillip J. Mather's masterful rendition of this timeless classic is a must-listen for any with an interest in and respect for the past.

"Alfred, Lord Tennyson, the then Poet Laureate, wrote evocatively about the battle in his poem 'Charge of the Light Brigade'. Tennyson's poem, written on December 2, 1854 and published six weeks after the event on December 9, 1854, in The Examiner, praises the Brigade ('When can their glory fade? O the wild charge they made!') while trenchantly mourning the appalling futility of the charge ('Not tho' the soldier knew, someone had blunder'd.... Charging an army, while all the world wonder'd'). Tennyson wrote the poem inside only a few minutes after reading an account of the battle in The Times, according to his grandson Sir Charles Tennyson. It immediately became hugely popular, and even reached the troops in the Crimea, where it was distributed in pamphlet form." (Wikipedia)

Watch out for length!

I neglected to see that this epic poem is 3 min long. Read it, don't but it. It is a very important English poem