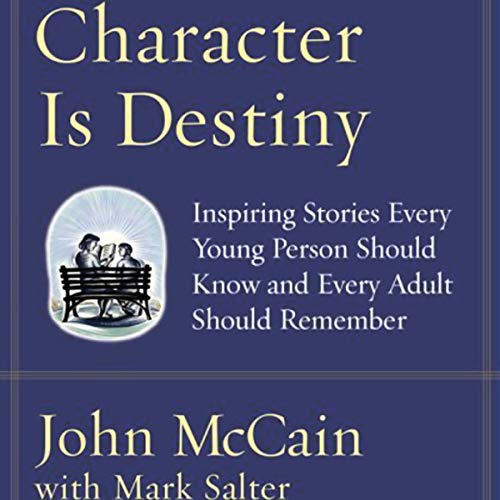 John McCain and Mark Salter have written three acclaimed best sellers, but Character Is Destiny may be their most influential and enduring book yet, a work for parents to share with their children and for Americans of all ages to read for inspiration and guidance.

McCain has been called "one of the most inspiring public figures of his generation" by The Washington Post. In Character Is Destiny,/i>, he shows us why, by telling the stories of celebrated historical figures and lesser-known heroes whose values exemplify the best of the human spirit. He illustrates these qualities with moving stories of triumph against the odds, righteousness in the face of iniquity, hope in adversity, and sacrifices for a cause greater than self-interest.

In Character is Destiny, we meet heroes of exemplary character. This book is John McCain's moving and eloquent tribute to men and women who have lived truthfully, and whose stories will stir the hearts of young and old alike and help prepare us for the hard work of choosing our own destinies.

"Amid much speculation concerning his plans for 2008, McCain has made a declaration of values that liberals can embrace as readily as conservatives." ( Publishers Weekly)

If you are a teenager in need of a lecture...

There were some characters in here I didn't know much about, but as McCain said, this is geared towards young people and is one long sermon. I like McCain, I wish there were audio of him dealing with the complex issues adults face.