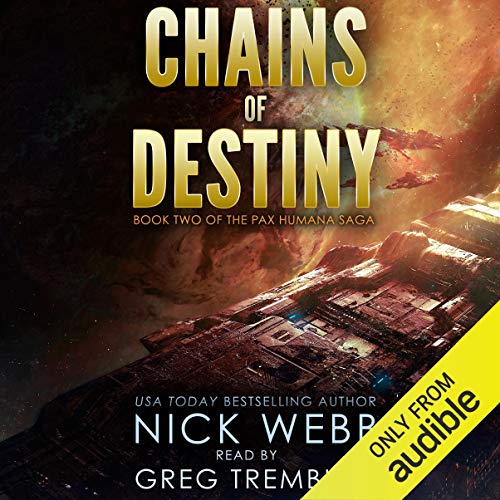 By: Nick Webb
Narrated by: Greg Tremblay
Try for £0.00

Captain Jacob Mercer and the USS Phoenix barely escape with their lives from the Imperial ambush at Liberty Station and soon find themselves orbiting the frontier world Destiny, a forbidding planet infested with pirate gangs. With critically unstable engines, Jake is forced to seek raw material for badly needed repairs before the ruthless Admiral Trajan tracks them down.

As they negotiate with the pirates, the crew learns some uncomfortable truths about their hero, Admiral Pritchard, and that Trajan's plans may not stop at the destruction of the Resistance. Before long Jake and his team find themselves at the mercy of the most despised class in the Thousand Worlds: slavers.

And sacrifices must be made.

With the captain stranded on the dusty planet below, Commander Megan Po leads the Phoenix in one more deadly showdown with Admiral Trajan and comes face to face with her most dreaded nightmare: sending people under her charge to die.

What listeners say about Chains of Destiny

This is turning out to be a very good space opera and I look forward to the next instalment.

After the first Audio, I still admit I wasn't totally sold on this series. But, this second Ep, totally blew me away. (I listened to the first 6 hours last week, and because of the break at work. UK may bank holiday I had some time away from it) and I was very eager to finish off as soon as I was back behind the wheel.

I was totally blown away by the depth of character to this episode. The MC's Megan Po, Ben Hemez, (sp) and Jake Mercer were almost alive in my head!... I felt everything they were going through, and the story just kept on and on surprising me and making my head hurt all at the same time. Great job to both writer and narrator here :)

Some of the best moments for me - SPOILERS

Jake - We all know he's making the biggest 'daft decision' of this book in going down to the planets surface with the pirates. The little altercation with the November family is very interesting though... a hint for book 3 there and that of course, Pritchard is alive. Hope on a different level.

But even though Jake has now been captured along side Alexandro and Ben, (plus two guards) he still never gives up in thinking and plotting to escape. This kinda of punishment and place would break so many and I do kinda wish that there were a few more destitute thoughts from him, but still with Ben elsewhere they have a plan, and a good plan. Not many of the decisions down in the mines are Jakes, some are just circumstantial and to me for this episode he does play a more downsized role.

LOVED LOVED LOVED - Megan leading the fight against Admiral Trajan. What a woman! what an absolute star and fighter she is. They all kinda question what Jake did for them in the previous book, but here she is and she's doing death defying moves under the ocean to prolong their time to prepare to kick the Admirals' behind.

I really enjoyed her story, as a character she's such compassion, and yet such depth to her decisions. Maybe just as much reckless as Jake, but fab job and good on her!

The scenes with Ben, were just awful. I cringed, I hated it, but it was brilliant writing and just as brilliant in the narration department. Greg really delved in deep I think to become this crazy psychopathic doctor, as he scared me so much, I kinda wanted to skip those parts, but couldn't because I wanted to know what would happen to Ben. I felt everything that they did in that room, and ugggh so so glad that Six eventually helped him to get out.

So on the whole this Ep really came alive for me. I am being honest though as I did have a couple of moments where I was jarred out of the story by a couple of repetitive words and phrasings. I do think that comes part and parcel of listening to something as opposed to reading it, reading it takes much longer, so anything that can be perceived as a crutch word/phrase is easier spotted and makes me want to avoid them myself. It's just an observation, that's all.

This book written by Nick and read by Greg is one of my fav so far, it has all the elements of an epic space opera and characters that you just can't help but feel for and love.

PS I already started on the next... :) Thank you both for an amazing ride.

Who can one trust??

As captain Musser is trying his best to take out the imperial admiral, work with pirates, and find the sabator aboard the Phoenix. There is a lot to keep up with in the second book of this trilogy. Who to trust,, is the truly Big Question.

Awesome.. keeps the reader intrigued with all the different story lines and angles that all come together.

Familiar Themes (with lots of Treachery)

Greg Tremblay does a great job with the narration and Nick Webb is a skilled author who does a good job with action sequences. But I found this book frustrating. I know that negative reviews usually aren't very popular but at least writing this review will serve as therapy for me after listening to this audiobook.

This book (the second in the series) starts with the characters in tough spot. Then things get worse. Then they get even worse. About 90% of this book is a negative arc. A combination of diabolically clever enemies, treachery, and amazingly stupid and naive decisions by the main characters lead them into a deeper and deeper hole. Then the last 10% or so provides a breathless series of action sequences in which heroics and lucky coincidences save the main characters from apparently certain doom so that they can limp off and get into more trouble in the next book.

As others have pointed out, there is a strong Battlestar Galactia vibe, overconfident fighter jock personalities (male and female) and various counterpoints forming most of the personal interaction. And there is treachery everywhere, with the main characters being amazingly blind to it until it is too late.

I hoped that maybe the characters would learn something and that the third book would begin a positive arc toward a satisfying conclusion but it turned out to be more of the same - treachery, misunderstanding, and a continuing series of jumps from the frying pan into the fire. And the authors is apparently planning a long series instead of bringing the series to a close.

Great continuing of the story

The story picks up right where #1 The Terran Gambit left off. I really enjoyed The Terran Gambit, and I did this one as well. It's twice as long as the first book, though, but it's packed with story and action.

This time the story takes place planet side as well, since things continues to go wrong for Captain Mercer and his crew. Characters are more fleshed out and there are several secondary plot lines in addition to the main one.

Tremblay continues to do a great job with the narration. Distinct voices for each characters and he is able to bring the feeling of the characters out through his narration. Very well done.

Recommended if you liked the first one.

this story is a great book by a very talented author. it covers all the bases for a great space\war drama.

Endi Webb has created an adventure with all the prerequisites: lots of action with plenty of blood; narley villains who are so cold and heartless we abhor them; a valiant core of individuals who suffer and will die for Freedom! It has all the ingredients required for the much loved space opera series. Where this book excels is the character development. "Doc" E. E. Smith, Edgar Rice Burroughs and their cohorts who birthed the beginnings of the Sci Fi opera are spinning. Here we have females that cuss like a swabbie, captains that lie to gain their position, and play by knife point play as a sadist carves up a good guy! The Boy Scout and delicate lady are out. Definitely more developed characters! Tremblay does a decent job but I feel he needs the zing that so pleases the listener
and raises the book from very good to excellent. But you've got to notice, the Sci Fi space opera has come a long way!

Would you consider the audio edition of Chains of Destiny to be better than the print version?

This is such a great book and such a great read by Greg! I am in anxious anticipation for book 3!! Leaves sort of a lot of things unresolved and I must know what happens! Really a great series!!!

The action, the pace, the characters.

Which character – as performed by Greg Tremblay – was your favorite?

I really like Mercer, obviously, but he does wonderful on all the character's voices! Especially the insane, one eyed Imperial Admiral!

YES!! Helped me get through some 12 hour overnight shifts!

Awesome work by everyone involved, the author and Greg!