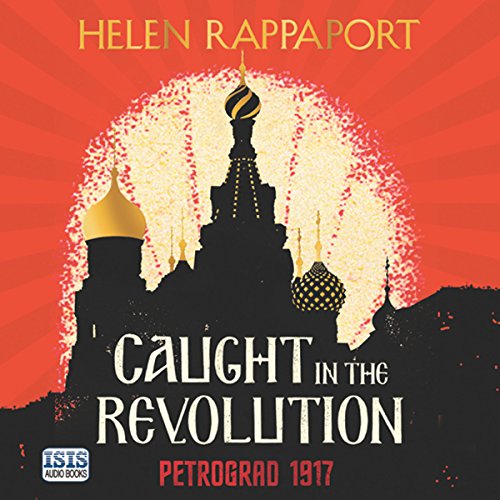 Caught in the Revolution

By: Helen Rappaport
Narrated by: Mark Meadows
Try for £0.00

Helen Rappaport's masterful telling of the outbreak of the Russian Revolution through eyewitness accounts left by foreign nationals who saw the drama unfold. Between the first revolution in February 1917 and Lenin's Bolshevik coup in October, Petrograd was in turmoil - felt nowhere more keenly than on the fashionable Nevsky Prospekt, where the foreign visitors and diplomats who filled hotels, clubs, bars and embassies were acutely aware of the chaos breaking out.

Among this disparate group were journalists, businessmen, volunteer nurses and expatriate socialites. Many kept diaries and wrote letters home. Helen Rappaport draws upon this rich trove of material to carry us right up to the action - to see, feel and hear the revolution as it happened.

What listeners say about Caught in the Revolution

Eye witness accounts by foreigners caught up in the events 100 years ago in, what was then known as, Petrograd.
Mark Meadows can pronounce foreign names reliably and has a good range of accents which bring the stories to life without distracting the listener by being over the top.

A fascinating diary of events as the Russian revolution unfolded through 1917.

If you are really interested in the Bolshevik revolution from the perspective of many who witnessed the violent and chaotic events in Petrograd (St Petersburg) then this makes for a fascinating read.
A great balance of necessary detail mixed with personal stories paints a picture of weak violent government, vicious mob rule and ultimately victims of all persuasions.
The narrator has a reading style which makes for easy listening.

I looked forward to the Audible version after reading the book a couple of years ago. The book itself is fantastic, but the narrator butchers it by needlessly by adding some of the worst accents I’ve ever heard. Frustrating as the was no indication of this in the audio sample before I purchased it.