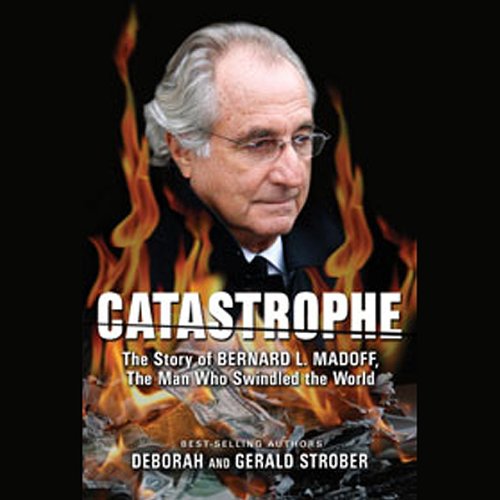 By: Deborah Strober,Gerald Strober
Narrated by: Connor Trinneer
Try for £0.00

In December 2008, amidst a world gripped by financial crisis, Bernard Madoff, a respected fund manager, and former chairman of NASDAQ, was arrested by the FBI for reportedly bilking thousands of trusting investors out of $50 billion. In the first comprehensive account of this financial mastermind's epic Ponzi scheme, Catastrophe exposes the real story behind Madoff's upstanding façade - his family's involvement and his unlikely rise and incredible crash.

This audiobook defines and explains the whole diabolical debacle, including how he seduced and persuaded sophisticated investors, how he evaded SEC watchdogs, and how his far-reaching crime pervaded the world. With first-hand victim accounts lending human interest, the book peels back Madoff's persona layer by layer, revealing how he developed his elaborate deceit and how and why he targeted and scammed the world of Jewish philanthropy.

What listeners say about Catastrophe

What a disappointment. If you read the news. watch tv, or use the internet, you will learn nothing new. Way to use blogs for content. And wait the information repetition creates filler and distraction. Much like Madoff victims I want my money back for this book.

All this book does is recycle news reports and comment postings from blogs. There are no interviews with victims or family members,deep background, history (how could this have been foreseen), etc. It's just a quickie grab for some of the Madoff money before the phenom is over. Highly disappointing.

Could have been much better.

The book jumps around a lot and gets very repetitive. The only thing I really got out of it is that Madoff did as much financial damage to the Jewish community as he did to anyone else. The entire book feels like they tried to throw it together fast while Madoff is still in the news. A 15 minute abridged version would have been better than listening to over four hours of this. The only positive is the narrator. He is clear and easy to understand. I really felt bad for him as he tried to breathe life into this material.

This book was published too soon. I was also disappointed that they referenced so many internet and blog comments. I was looking more for facts and insights into why Madoff did this horrific scam. Wanted to know how it worked and how he pressured his feeder funds. Felt I got more out of the one hour Frontline program than this book. Would not recommend.

Dissapointing first book about the subject

This is basically just a collection of statements and histories collected from newspapers from dec. 2008. The writers doesn't even seem to undestand what actually happened in Madoff's company prior to the crash. I am sure the next book will be a lot more exiting. Don't bother.

Would you listen to Catastrophe again? Why?

yes, it just amazing what people can do and not care about other people

seeing the inside of how people think

If you could give Catastrophe a new subtitle, what would it be?

give all your money to a crook

They rushed to get this book out

Less quotes from obscure people. They just kept coming, one after another taking up entire chapters

What could Deborah Strober and Gerald Strober have done to make this a more enjoyable book for you?

They could have interviewed someone close to the story. They may have at the end, I could not get that far.

This was an excellent read of the man Bernard Madoff without being too technical of the crimes he committed. It was well read & held my interest from beginning to end and aroused my interest in the man so that I did some further research to bring me up to date.