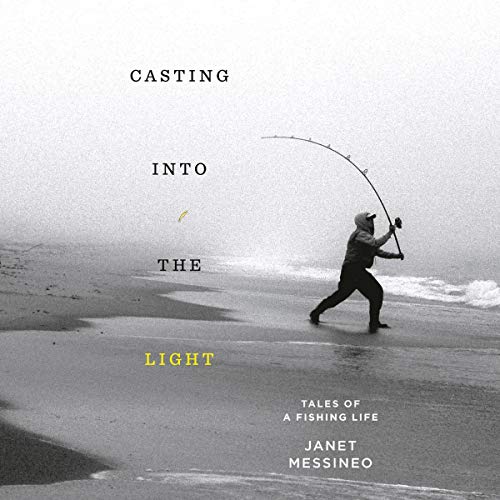 Casting into the Light

Janet Messineo knew from the get-go that she wanted to become a great fisherman. She knew she was as capable as any man of catching and landing a huge fish. It took years - and many terrifying nights along on the beach in complete darkness, in search of a huge creature to pull out of the sea - for her to prove to herself and to the male-dominated fishing community that she could make her dream real.

Messineo writes of the object of her obsession: striped bass and how it can take a lifetime to become a proficient striped bass fisherman; of stripers as nocturnal feeders, hard-fighting, clever fish that under the cover of darkness trap bait against jetties or between fields of large boulders near shorelines, or, once hooked, rub their mouths against the rocks to cut the line.

She writes of growing up in Lawrence, Massachusetts, and Salem, New Hampshire, the granddaughter of textile mill workers, tagging along with her father and brother as they cast off of jetties; of going to art school, feeling from a young age the need to escape, and finding herself, one summer, on the Vineyard.

She describes the series of jobs that supported her fishing - waitressing at the Black Dog, Helios, and the Home Port, among other restaurants. She writes of her education in patience and the technique to land a fish; learning the equipment - hooks, sinkers, her first squid jig; buying her first one-ounce Rebel lure.

She gives us a rich portrait of island life and writes of its history and of Chappaquiddick’s (it belonged to the Wampanoags, who originally called it Cheppiaquidne - “separate island”); of the Martha’s Vineyard Derby: its beginning in 1946 as a way to bring tourism to the island during the offseason, and the Derby’s growing into one of the largest tournaments in the world.

Messineo describes her dream of becoming a marine taxidermist, of learning the craft and perfecting the art of it. She writes of the men she’s fished with and the women who forged the path for others (among them, Lorraine “Tootie” Johnson, who fished Vineyard waters for more than sixty years, and Lori VanDerlaske, who won the Derby shore division in 1995). And she writes of her life commingled with fishing - her marriage to a singer, poet, activist; their adopting a son with Asperger’s; and her teaching him to fish. She writes of the transformative power of fishing that helped her to shake off drugs and alcohol, and of her profound respect for fish.

Casting into the Light is a book about following one’s dreams and about the quiet reckoning with self in the long hours of darkness at the water’s edge, with the sounds of the ocean, the night air, and the jet-black sky.

"A tackle box full of fishing tips, memories, histories, taxidermy, and even recipes from an angler who found focus and purpose for her life among her fellow fishermen on Martha's Vineyard...A chronicle of a life in fishing by an author who seems like good company." (Kirkus Reviews)

"Delightful...great insight into the existence of professional anglers and the insular culture of Martha's Vineyard...Messineo's captivating memoir brings a refreshing mix of vulnerability, accessibility, and joy to the fishing genre." (Publishers Weekly)

"How Janet Messineo, through sheer grit, managed to acquire her skills and gain acceptance into the boys' club of master fishermen on Martha's Vineyard reads like a fairytale in which a callow youth overcomes endless obstacles to realize a seemingly impossible dream. But be warned: Once you start reading this gripping and instructive saga, it's hard to put it down." (Lisa Alther)

What listeners say about Casting into the Light

Great adventure - from a fellow fisherman

Enjoyable listen. Enjoyed getting to know Janet through her writings and to share in her adventures on MV a place I have been many times.

Her fishing tales had me so captivated. I was absolutely lost to the world while reading this book. I finished it in two days, because I just couldn't put it down! The humor was so relatable. I had many laugh out loud moments. I also experienced some heartbreaking moments that moved me to tears. REAL tears down my face. I highly recommend this book. I know I will read it more than once.

A woman who created her own adventure

I have done no fishing and other than crabbing in Sengekontacket in the 1970s. I have never been drawn to the idea of being cold and wet on a windy night catching razor-toothed big fish. But this book!

Janet's story is fascinating, awe-inspiring and a real joy. I bought the audiobook and rationed myself to make it last longer. I had it in the car so every time my husband rode with me, I backed it up so he could hear it -- and I got to hear it twice. After six weeks, I finished the book. It was really wonderful, every minute. Back in the 70s I knew Janet. I remember her staying out all night fishing and until now I hadn't understood why. The book explains everything. I especially enjoyed hearing how she came to understand the value of sustainable practices that may help these fish schools live on into the future. Thank you for helping me understand and appreciate your world.