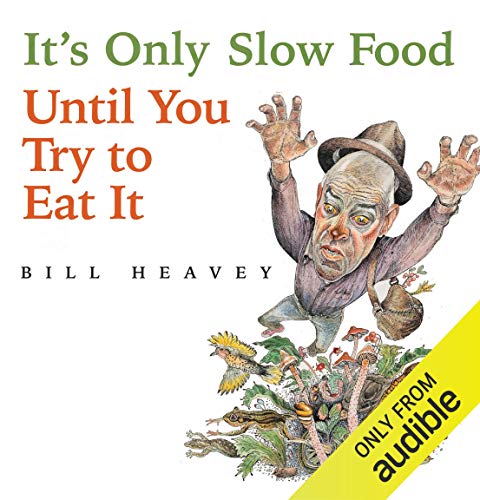 It's Only Slow Food Until You Try to Eat It

A longtime contributor to Field and Stream, Bill Heavey knew more than a little about hunting and fishing when he embarked on an ambitious project a few years ago to see how far he could get eating wild. But Heavey knew next to nothing about gardening or foraging, and he lives in northern Virginia, close to Washington, D.C. The rural wilds, this was not. Is it any surprise that his tasty triumphs were equaled by his hilarious misadventures?

With just the right dose of self-deprecation, Heavey tells the story of his quest, beginning locally and moving out from there. He digs up the ground behind his house and plants an elaborate garden only to be driven to squirrel murder (and a cover-up). He experiences abundance mania in the perch run on the Potomac, and again when he spots perfect wild mushrooms in Arlington National Cemetery. He forages for wild watercress, berries, and pawpaws within the beltway, and hunts crayfish in Louisiana and caribou on the Alaskan tundra.

With teachers that include Paula, a grizzled local so popular among DC fishers that she’s been called the Pablo Escobar of herring; Hue, a Bronze Star ex-military survival instructor and foraging expert; Michelle, a single mother unself-consciously devoted to eating local, and Jody, a weathered Cajun fisherman, Bill learns how to catch and cook frogs, prepare cattail pancakes, make salads out of garden weeds and bake a pie with foraged wild cherries.

To the delight of his readers and to his young daughter’s despair, Heavey also suffers serious blood loss, humiliation, and meals that are best described as edible. Entertaining and informative, this is Bill Heavey at his best...and worst.

Not what I thought, but still loved it.

I immediately purchased and downloaded this book after finishing Heavey's If You Didn't Bring Jerky, What Did I Just Eat? That compilation of short stories instantly rose to my favorite reads. I was expecting more of the same with this book, however this was more of a connected journey with his foraging/foodie practices. I still enjoyed it, but it wasn't exactly what I was expecting.

Can't say enough about bills books they are great for the outdoorsman. I highly recommend all of his books

I found this to be very educational and entertaining and I am the reader with the most negative thoughts and feelings
about killing, and hunting any living critter, there could be. But I did enjoy the descriptions of the various locations Bill Heavey traveled to, from the bayous of Louisiana to the Artic Village in northern Alaska. What trips, and his ease with the new people he encounters in the various locals.

The ending has a weight that can not be measured.

I loved this book. it is very different than another compilation of Bill's work. this pulls back the veil and let's you see a different side. The ending weighs on my mind as I prepare to feed my family, and I relate to the text.

Previous books by Heavey have been enjoyable. Since this one wasn’t as well done, I guess he attempted to throw in enough vulgar language to compensate. It didn’t work for me. I’m deleting it off my account.

I’ve enjoyed Heavey’s magazine writings for many years. Now that I’ve finally started on his books, I’m also enjoying this format (Audible) that allows me to enjoy Bill’s stories outside their native habitat (my bathroom library).

This is the 3rd book by Bill Heavey I have read. I enjoyed the first two, however in this book Heavey’s language and writing topics become much more graphic and coarse. Not what I am looking for in an outdoors humor writer trying to follow in the steps of Ed Zern and Patrick McManus. Very disappointed!