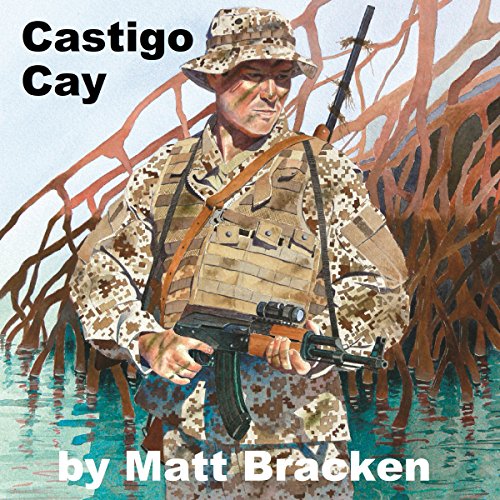 By: Matthew Bracken
Narrated by: Matthew James Bracken
Try for £0.00

Dan Kilmer is a former Marine sniper in his early thirties. He returned home from military service in the Middle East and gave college a try, but his combat experiences prevented him from fitting into campus life. In a South Florida boatyard, his uncle was attempting to refurbish an old cargo schooner, and Dan left college to help him finish the flagging project. After two years of work but before the 60-foot boat was relaunched, his uncle fell from a scaffold and died.

While still in his twenties, Dan inherited the schooner Rebel Yell. Soon after, he left the United States to embark on a series of voyages, mostly in pursuit of beautiful women and good times. While he was away from America, new federal taxes were imposed on luxury property, including privately owned yachts. Dan cannot pay these or other new taxes, so he can't return to the States without risking confiscation of his schooner. Instead he must always fly under official radar and earn a living by his wits while staying one step ahead of the IRS and other government agencies.

He must navigate the reefs of government control while always searching for a way to make money without the permission of the local authorities. This usually requires some type of shady dealing, subterfuge, and stealing from thieves as Dan moves from port to port. A shifting cast of crew members inhabits Rebel Yell, but the novel is about Dan Kilmer and his quest to live as a free man in an increasingly unfree world. In Castigo Cay, Dan must sneak back into South Florida under the radar to conduct a short-fuse rescue mission.

What listeners say about Castigo Cay

This is an excellent listen. What is amazing is how much of this story has actually come true in one form or another since Mr. Bracken wrote it. The parallels between Castigo Key and Jeffrey Epsteins pedophile island are astounding. This is a superb book and I highly recommend it.

Matt does a great job narrating the 1st in the Dan Kilmer series of novels. A great Caribbean adventure with fast boats, pretty girls and some cool gear thrown in to the mix.

Looking forward to Mr. Bracken narrating the next in the series!

This book was very good and it gloved in with the Enemies Foreign and Domestic Series with establishing timeline. There are many very good tips for situations and how to work through them. The Story was very enjoyable. The only criticism I have is that Matthew should hire a good actor like Dick Hill to read.

I couldn't stop listening to it. Bracken did a great job writing and narrating it. I can't wait for The Red Cliffs of Zerhoun.

Everything anyone could want...adventure, boats, sea, and air. Combat, tactics, weapons and survival. Good and evil. Patriot games.

Following the Author for 20+ YeRs!

I first read his writing, Online, and recall the questions he researched for that Second Book, ~Especially~ a portion about "COINING GOLD" . . . ~ (yes Matt, its the "Jeweler" writing this)~ . . .

I am so happy to buy his books now, being part of this writer's history.

Dan Kilmer will Continue to be a good Series, with a start like this.

philip, from the Great Pacific NorthWET.

How far will an ex-marine go to save a girl from bad guys? Unbelievably far. Bracken lays out the story and the characters then a slow build of intensity to a breath-holding crescendo! You'll be entertained and educated by the end.

Really enjoyed the storyline and the author narrating it I’ve also enjoyed his other books with his previous narrator. Matthew keep up the good books. I really enjoyed the audiobooks and how long they are. I absolutely enjoy a good long audiobook. 15 to 20 hours. All of these books by this author are great listens

Another fantastic book by Matt! Thanks hope you get your other writings published on here!

do yourself a favor and listen to this book. i thoroughly enjoyed the narration, story, and realism.