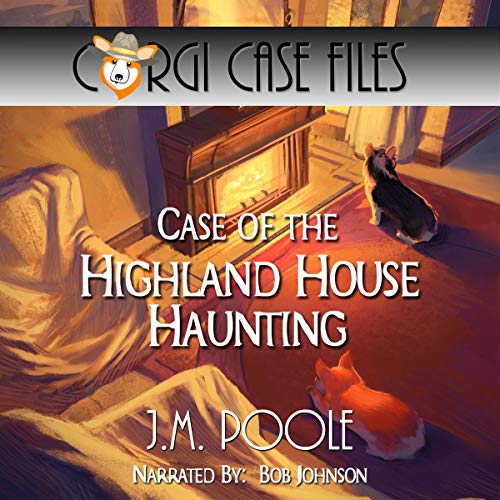 Case of the Highland House Haunting

When Jillian Cooper purchased one of Pomme Valley's historic properties, Highland House, little did she know a violent murder happened there over 70 years ago.

Tasking Zack and the dogs with disproving the rumors that Dame Highland's ghost walked the halls, guarding her long hidden treasure, Jillian moves forward with her plans to turn the historic house into a bed-and-breakfast. However, when an "accident" claims the life of a contractor, it becomes apparent that someone doesn't want people snooping around the house.

Can Sherlock and Watson, along with their pack of humans, prove the ghost is a fake? Will the corgi crime fighters put a stop to the shenanigans before another tragedy can happen?

What listeners say about Case of the Highland House Haunting

Such a cute series!

This episode is less “exciting” than the other installments, but I still loved the story. There is a mystery to solve about a haunted house.. or is it? The characters are lovable and the corgis are just the best! Any dog lover and cozy mystery lover will enjoy this series

The dynamic Corgi duo are at it again along with their owner Zack. Zack's girlfriend Jillian Coopers unknowingly buys a house steeped with murder and a mystery. The moment Jillian starts to have the home repaired mysterious things seem to happen from the death of a construction crew member to trap laden hidden rooms. The storyline is well thought out and phenomenally written. This book contains all the elements of a good story intrigue, murder, revenge, comic relief and oh yeah a curse. I loved all the twist and turns and quirky characters. Move over Scooby doo the dynamic Corgi's are coming to the rescue. I highly recommend this book. This is my honest unbiased review.

The Corgis Solve a Jewel Heist

When strange things begin happening at the "haunted" house Jillian purchases to turn into a bed and breakfast, Zack and the corgies are called upon to sort out a prohibition era mystery in this adorable cozy mystery.
The plot is complex and well written, the mystery is unveiled in pieces with the last one not revealed until the last few pages of the book and the characters, including the villains and the aging relative with more spunk than anybody her age ought to have, are full blown and lovable in their eccentricities, but it's the corgies, Sherlock and Watson, as usual, who steal the show.
Bob Johnson who, I believe, has narrated all of the books in this series, has a voice that is easy to listen to . He brings the characters to life in a way few people could and is, for me, the voice I'd hear when Zack was speaking if I were reading the book.
This is another lively, amusing and thoroughly engaging story by a writer who clearly knows and loves his subjects.

Would make a great TV movie

In this installment, Zack, his girlfriend Jillian, and corgis Sherlock and Watson go on the hunt for missing jewels in a "haunted" house. The twisty plot (which mirrors the twisty corridors and hidden rooms in the mansion of a 1920s socialite) was intriguing, but it was the corgis and Bob Johnson's narration who stole the show, as usual. I enjoyed this installment more than most in this easy-going, enjoyable series. (Minor cursing)

I received a promo code for this title and am leaving a voluntary and honest review.

This one started out a little different, with a haunted house! I was wondering if the author was going to stay to true crime, or go a bit paranormal. He stayed true crime.

It was very interesting because it revolves around a crime that happened many years ago. And it goes full on Scooby-Doo with a house and secret compartments! It was a lot of fun.

I do have two small gripes with the book though.
1. When they found some old, prized possessions of the woman who had owned the house, they never circled back around to the woman's niece they talked to earlier. I think that would have been nice and good closure for the old woman.
2. They never found out what happened with the two robbers from the past who were MIA for a week, then found.

Hey, though other than that, two unanswered questioned I wanted answered, this book was fantastic. The voice is superb, the audio narration is brilliant, and I'm looking forward to many more books in this series!

Book 7 in this series and just as wonderful as the first 6. Zack and Jillian are fun to read about but the real pull for me is the 2 corgis. Sherlock and Waston! This book has Jillian showing Zack the haunted house she has purchased to renovate. Along the way, Sherlock and Watson help their humans find out so much about this lovely old house and the women who once lived there. I really enjoyed all the twists and turns this book takes. I also love this series enough that the new puppy I just got I named Sherlock. The narrator for this book and the whole series is wonderful too really giving life to the audiobook. I can't think of a better narrator for this series than Bob Johnson, he is simply perfect.

This series has never failed me. Each book in this series is very entertaining. I love the characters and the fantastic storylines. Sherlock and Winston are my favorite characters. These two dogs keeps Jillian and Zack busy with finding clues to mysteries. This time it was with missing jewels in a house Jillian was renovating.

My favorite part was at the end when the dogs ran and Zack and Jillian knew something was about to happen when the thieves had them captive.

The author is fantastic and the narrator does a fantastic job narrating these books.
i received this book free of charge in exchange for an honest review.

If you've never met these two fun and furry crime solvers (Mr Sherlock and Ms Watson) and their widowed humans, you're missing a lot of fun! Zack's girlfriend Jillian has bought a massive historic house and is having it renovated into a B&B. The house has a lot of interesting history and is said to be haunted as well as having a fortune in jewels hidden away in it. All of the characters certainly are, and the sleuthing is well done with lots of bootleggers nooks and hidey holes as well as good natured rivalry among friends. Loved it! Easily a stand alone, but why?.
Bob Johnson aces the narration with just the right touch that highlights the humor by downplaying the guffaws.
I won this audio in a giveaway.

Zack and Jillian are out test driving his new toy, I mean, new equipment for his winery. Jillian gets a call from the foreman of the crew she hired to redo the house she purchased. Highland House had been empty for quite a while and Jillian wants to turn it into a B&B.But accidents seem to plague the redo. Then a man is killed. Zack and his two corgis are on the trail to find out what is happening. Ghosts, murder, and riches seem to be the theme for this caper as Zack,Jillian and the two adorable corgis seek to learn the truth behind the muders.
Bob Johnson is a remarkable narrator who brings the characters to life and his voice keeps you enthralled with the story!
Fantastic audio and story!!

The Case of the highland House Haunting isn't the best in the series but it's an okay book to listen to while you are doing errands or chores. The story is a bit predictable and with a slow pace. However, Jeffrey Poole does do a great job creating witty dialogue between the characters. Bob Johnson does a good job bringing the story to life and injecting humor into the story.

I received this book for free in exchange for an unbiased and honest review. He's the perfect narrator for this series.