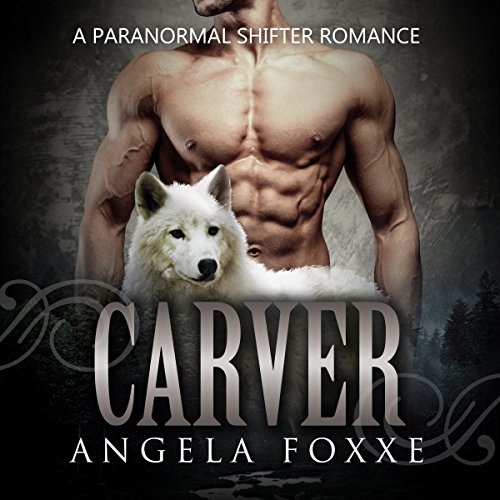 Monique had been hiding away in the northern Vermont Mountains for the previous seven years. Hiding from her past, from her pain, and mostly from herself.

However, all that was to change the day she came across an adorable wolf pup who appeared to have a profound effect on her.

Little did she know, the pup was the son of Alpha Wolf Carver, who feared his son had been kidnapped.

Upon discovering that his pup was safe and being cared for by Monique, Carver realized he had the opportunity to ask the young girl for one final, life-changing favor.

What listeners say about Carver

This story had a lot of potential. The plot is interesting but it is put together in a slightly haphazard way, so I felt I had to piece the story together. I liked the strong but vulnerable female protagonist but (warning: a little bit of a spoiler) I didn't like how easily ousted from his position as the main male character Carver was. The narration was good.

This was a decent story about shifters that's full of suspense, action and some romance. Carver's son is special, and chooses Monique to be his guardian to help protect him, and as his protector she gains some really interesting abilities.

Overall, the plot was good and the romance between Carver and Monique was sweet; however, with so much packed into such a short story, it did feel like it was jumping around.
The narration was great! David Quimby really does a good job with the different characters and emotions.
I received this audiobook in exchange for an honest review.

Carver(Alpha Wolf), Kirk(Carver's unique son with extraordinary skills), Monique(rescued Kirk from the crazy Brennen who wanted power) are three very unique individuals who make this story very good. I loved the story and the way that each character came to life within the story. The narrator was very good and made the entire listening experience outstanding.

It Started Off OK….But Lost Me!

I love all types of shifter stories, and the summary to Carver really caught my attention. I was excited to listen, but sadly as the story unfolded, I just could not connect to either the plot or characters.

Overall, it was an OK story, and it had an interesting concept of a guardian and shifters; however, the delivery of the plot left me confused, lost, and frustrated with all the jumping around. Many of the scenes felt under-developed, and l was left with more questions than answers. I thought there were too many scenes, ideas, and time jumps packed into such a short story.

This is the first story I've heard narrated by David Quimby, and he did a decent job. He used the right amount of tones, and inflections to convey the different emotions throughout the story.

I gave the story an overall 3 stars. I didn't dislike the book, I just felt confused throughout the story. I received this ARC in exchange for an honest review.

Would you consider the audio edition of Carver to be better than the print version?

I have only listened.

What does David Quimby bring to the story that you wouldn’t experience if you just read the book?

He is a great storyteller. Monique's accent was good and the rest were good. Rather than try to have different voices for each he became a storyteller. Often, that is the best method, as in this book.

I enjoyed the shifter story, with some almost Indian Lore based roots. The love story of Monique and Carver, with the pup Kirk. There seemed to be a number of enemies. Teamwork and their tight relationship made them come out ahead each time. Good story, one that I will listen to again. I do recommend.

loved the book. i.listened twice. i cant wait to.read more by this aithor

What an enjoyable listen! I love shifter stories, and this one was a lot of fun. Foxxe's writing was incredibly engaging, the smut was smoking hot, and I found myself actually invested in the action and the love story. If you are looking for a well narrated romance novel with well written action and some actual plot, you will enjoy this book.

Also, you should know that this audiobook was given to me for free in exchange for a fair and unbiased review.

Such a good book

I can't wait for the next book. I was given this book in exchange for my honest review

I really enjoyed this story about shape shifter , great story great narrator spoken very well. not along book which is very good.. received this book free for a honest review and unbiased option via audio book boom

it would have been five stars if not for the filthy words.

This was such a fascinating shifter story! Totally loved every bit of it!! Was different than any I'd read/heard before. And I definitely feel it was better being narrated by a male. A must have!!!

Good story overall but jumped around a bit

I enjoy shifter stories and was really looking forward to this one. The story starts off pretty good then it seems to jump several years later and I was kind of lost about what happened...

I'm not sure I connected well with the characters. It seems to me there were missing chapters or something.

The narrator did a fairly good job bringing the story to life.

The idea concept of a guardian is an awesome one but I think the story could have developed better.. Even getting lost some I still enjoyed listening to the story. The conclusion was ok not what I expected.