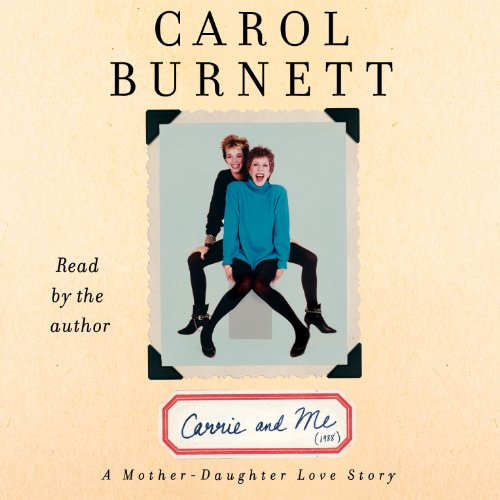 In this beautiful and poignant tribute to her late daughter, award-winning actress and New York Times best-selling author Carol Burnett presents a funny and moving memoir about mothering an extraordinary young woman through the struggles and triumphs of her life.

Despite her busy schedule, Carol Burnett always made time for her three young children. But her oldest daughter, Carrie, faltered in adolescence, losing the self-esteem that had fueled her popularity and success in school and hiding her pain in a downward spiral of addiction. As Carrie became lost to drugs, Carol found herself with a daughter in grave danger and a marriage that was bending under the pressure.

Carrie eventually broke free from her addiction. Like her mother, she had a wonderful sense of humor and became a successful actress, singer, and writer, even writing a play about Carol’s childhood. But tragedy struck again when Carrie was diagnosed with cancer. She died at the young age of 38, leaving a legacy of kindness, creativity, and joy along with a short story that mirrors her own journey, published for the first time in this book.

In Carrie and Me, Carol Burnett shares her personal diary entries and correspondence revealing her anguish as a mother of a troubled teenager, the epiphanies that helped her help her family, and the grief and then the hope she felt after Carrie’s death. Through Burnett’s inimitable voice, we get a portrait of an unforgettable young woman that will bring hope to anyone struggling with raising or losing a child.

I would recommend this book to a friend. If you heard all the news covering Ms. Burnett and her daughter, Carrie, over the years. This book will definitely clear up what you've heard or read. I started and stopped reading a couple of times because I was concerned it would be a tell and cry sort of read. I finally buckled down and read it. It's not! It is more about a relationship, love and respect than a sad memorial. Don't get me wrong. Yes, it touches on Carrie's illness and her passing, but this book isn't about that. It's about her life, her legacy. It's warm and heartfelt. I cried and I laughed because I related.

Carrie, of course, because she was real, unspoiled by her parent's success, and a hard working young women that wasn't afraid to go after what she wanted. She struggled in her youth, but got it together as an adult.

I think Ms. Burnett tried hard to read this book like she would any other book, but you could definitely hear when her heart was breaking. You feel for her if you've suffered your own loss

Yes, and I tried. Not possible thou, because I have other responsibilities.

The audible version has elements that are not found in the written version. I liked the song written and sung by Carrie.

What made the experience of listening to Carrie and Me the most enjoyable?

Learning about the special relationship Carrie and Carol had.

What other book might you compare Carrie and Me to and why?

Her recollections of tender moments, funny moments, and troubled times. My favorite was hearing about the fiasco with the taxi when she was late in her pregnancy.

A celebrity's account of what could be any mother's story.

Something so unique to Audible books...I loved HEARING Carrie's song rather than just seeing in on a page.

Where does Carrie and Me rank among all the audiobooks you’ve listened to so far?

Nice! Carol Burnett has several books. All are good! This was my best choice.

It was very honest and tearful.

Yes! It was funny, sad and I could relate to book/story bc I enjoy writing. Carrie's story and journey to Graceland was great! I love Elvis anyways! LOL!

I understand we all have a story.. But this story doesn't make it a good story due to it being a celebrity's child. I loved Carol Burnett back in the 70's and 80's, but she is not a good narrator. She doesn't "read" particularly well with intonation and her sentences end with an upward higher tone, which is a little irritating. I didn't listen to the end, I found it a little boring, like eating a cheese sandwich that has no substance or needs a little pickle and mustard. YAWN! Rather download "LIFE" Keith Richards... now that's a story and a half!!