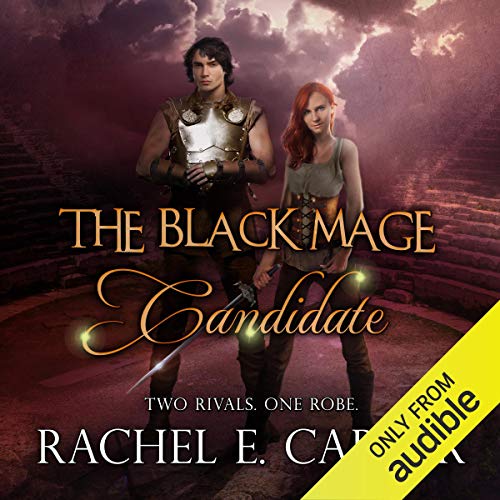 By: Rachel E. Carter
Narrated by: Patrice Gambardella
Try for £0.00

Welcome to the candidacy. Where dreams go to die.

Twenty-year-old Ryiah is a black mage of combat, but she is not the Black Mage. Yet. She's had her eyes on the legendary robe for as long as she can remember, and in just one year she will have a chance at her country's prestigious - and only - tourney for mages. Too bad she is going up against a certain non-heir. The one person she has yet to beat.

Meanwhile Ry has a year to prove herself in her new role as a war mage and the prince's betrothed. Neither is quite what she expected and complications arise on both fronts. War is on the horizon, and with so many enemies the kingdom's fate is more than ever at risk.

The candidacy finally arrives, but it's only the beginning. Nothing can prepare her for what comes next.

What listeners say about Candidate

Really hope someone else narrates the next book. Listened to the 1st and 2nd books and I'm still enjoying the story with the 3rd but it was hard to get through it with the narrator's monotone. I actually ended up reading the book and giving up on the audio.

God this narrator was terrible

Amazing story, terrible narrator. I couldn't even tell if someone was talking or if it was the main characters inner dialogue, her voice was just so monotone. I would have loved if Melissa Moran narrated this one too. Amazing story, Rachel E Carter really knows how to rip my heart to pieces!!

Narration is stilted and detracts from the story

Where does Candidate rank among all the audiobooks you’ve listened to so far?

Good story with a good heroine! There are interesting twists and turns. I want to hear what happens next and I feel it is certainly above average. Just change the narrator.

What was one of the most memorable moments of Candidate?

The heroine's determination to become the top mage.

Unfortunately, the narrator sounded like a 5th grader reading. It was stilted and lacked emotion to the narration. She even mispronounced several words, which throws me out of the story.

Discovering her brother was a rebel and dying.

should have kept the first narrator

Should have kept Melissa Moran as narrator. Patrice was very dry, robotic.

I am not a harsh reviewer, most any books that I can make it through I will give 4-5 stars, sometimes it is subject matter or genre I am trying out. It is ok, I understand I am not going to like everything. Melissa Moran was fine in the first 2 after I speed it up to 1.1 or 1.2, I gave it 5 stars, I could get through it and it is a good story. This however was a complete gut job and the producer needs to be fired. It killed any semblance of the story, I had it up to 1.5 just to make it through. I came away with the feeling the story was just ok, instead of great story which it should be. I have listened to the sample of the 4th and will not purchase that, period. They both feel that they are being read by someone who is just learning to read, pointed, hesitant and drawn out. There was no performance to this book and if I could find a negative scale it would have clicked it. I figured after 3 chapters it would get better...it didn't.

I had a very difficult time figuring out which character was saying what. The narrator’s voice was annoying and not easy to listen to.

The story was wonderful but the narrator was awful. she changed the pronunciation of multiple names and you could hear the weird stretch of words when she turned pages. she also provided little voice acting to make the speakers distinct.

I love the Black Mage series! the story is great the characters are great but this time the narrator on the audiobook was terrible! I'm not sure why they changed narrators but this one was so blah and Bland with no emotion it was almost like hearing someone read out of a textbook. Sometimes I would have to rewind and listen to something again because it was so monotone I couldn't tell when the different characters were speaking until she said their names. I'm definitely going to check the narrator before I buy the next audio book in the series. if it is the same one I'll just have to get the book and read it myself when I have a chance because I don't want to miss out on the story just because of the bad narrator.

I have been able to make it through some rough readers before, such as the one who read the first two books of this series. She doesn’t keep the same pace through the reading, doesn’t do anything for the characters, and no emotional range.

just as good as the other two and a half

this book was a little bit darker than the rest so I anticipate that the next one is going to be even more so. I really enjoyed reading this book I also enjoyed the narration because I've done both read and listen. I believe that this book is probably the best in the series so far but I can't wait to read the next one